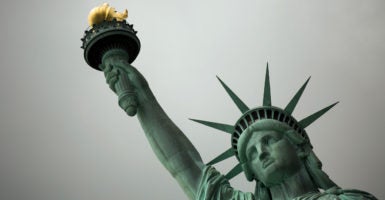 Those immigrating to the United States in 1903, when “The New Colossus” appeared on the Statue of Liberty, were the “tired ... poor ... huddled masses yearning to breathe free.” What America offered them was freedom, work, and opportunity. (Photo: Drew Angerer/Getty Images)

The left-wing media are having a field day distorting acting U.S. Citizenship and Immigration Services Director Ken Cuccinelli’s comments regarding the famous poem emblazoned on the base of the State of Liberty.

Discussing the Trump administration’s new “public charge” rule, an NPR host asked Cuccinelli whether the poem’s words “give me your tired, your poor” are also part of the American ethos.

“They certainly are,” said Cuccinelli. “Give me your tired and your poor who can stand on their own two feet and will not become a public charge.”

Those media hosts pouncing on Cuccinelli show little interest in the crowning phrase of the poem, “yearning to breathe free.”

“That’s what the poem says America is supposed to stand for,” Burnett charged.

Cuccinelli explained to Burnett—who ignored him—that the first immigration law excluding those who would likely become a public charge was passed in 1882, the year before Emma Lazarus wrote “The New Colossus.”

Immigration is just part of the larger discussion dividing us so deeply today. Is “freedom” what primarily defines our nation, or is it welfare and redistribution of income?

And if it’s “freedom,” what does that mean?

“If you have a welfare state … in which every resident is promised a certain minimal level of income … whether he works or not, produces it or not, then it really is an impossible thing” to have free immigration, Friedman said.

Those immigrating to the United States in 1903, when “The New Colossus” appeared on the Statue of Liberty, were the “tired … poor … huddled masses yearning to breathe free.” What America offered them was freedom, work, and opportunity.

They came, learned the language, became part of the country and its culture, and participated in building the great and prosperous nation that America was to become in the 20th century.

It’s not to say that many who aspire to come to America today are not motivated by these things. But because welfare is so available now, in contrast to 1903, we must be careful.

Not only is it costly to us, but—despite the claims of progressives—rarely is it compassionate. I know from personal experience that we should be offering those escaping oppression a free life, not more government.

It is simple prudence to make sure that new arrivals to the country become producers and taxpayers, rather than consumers of government benefits.

The Congressional Budget Office has just sounded its latest alarm that the national debt burden is headed to “unprecedented levels,” posing “substantial risks” to the nation.

I wish these news media hosts trying to get such mileage from “The New Colossus” were equally anxious to look for faithfulness to other songs and poems that also are part of our national culture.

Songs like the one composed in 1918 by Jewish immigrant Irving Berlin, with the words:

“Land that I love.

“Through the night with a light from above.”