‘Allows Our Borders to Remain Open’: Biden Administration Makes It Easier for Illegal Migrants on Welfare to Stay 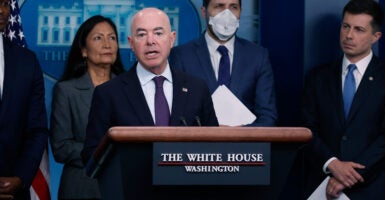 "Consistent with America’s bedrock values, we will not penalize individuals for choosing to access the health benefits and other supplemental government services available to them,” says DHS Secretary Alejandro Mayorkas, pictured at the White House May 16. (Photo: Chip Somodevilla/Getty Images)

The Department of Homeland Security will make it easier for certain illegal migrants benefiting from certain welfare programs to stay in the country beginning Dec. 23.

The “Public Charge” rule, which applies to noncitizens “likely at any time to become a public charge,” will no longer consider certain nutrition, health, and housing benefits for inadmissibility, according to DHS. Noncitizens who are considered a “public charge” face potential inadmissibility and denial of green card status.

“We are excited and welcome to see the new rule from the Biden administration updating the barbaric weaponizing of public charge used by the former administration. This allows our borders to remain open to a large portion of the world where immigrants struggle and seek the American dream,” Allen Orr, immediate past president of American Immigration Lawyers Association, told the Daily Caller News Foundation.

The benefits that will be permitted include Supplemental Nutrition Assistance Program, Children’s Health Insurance Program, Medicaid, housing benefits, and benefits related to immunizations or testing for communicable diseases.

“Consistent with America’s bedrock values, we will not penalize individuals for choosing to access the health benefits and other supplemental government services available to them,” DHS Secretary Alejandro Mayorkas said in a statement Thursday.

Noncitizens who don’t apply for public benefits but whose family members accept benefits won’t be considered public charges, according to DHS.

“Today’s final rule is a relief for all foreign nationals residing in the U.S.,” immigration attorney Jonathan Grode told the Daily Caller News Foundation. “The Trump administration created a tremendous amount of uncertainty and concern that changes to public charge rules would make actions legal actions ‘today’ cause the denial of an immigration benefit in the future.”

The rule has rarely been used for deportations. Between fiscal year 2015 and fiscal year 2019, Immigration and Customs Enforcement deported 123 people considered to be public charges out of the 1,225,130 deportations during the time period, according to Syracuse University’s Transactional Records Access Clearinghouse.

“With this restoration of the previous public charge protocols, predictability has returned. While you can debate whether the rule as constructed is fair, at least we know what is and what is not permissible,” Grode said.