New Rule Could Deny Green Cards, Visas to Immigrants Who Use Welfare Programs 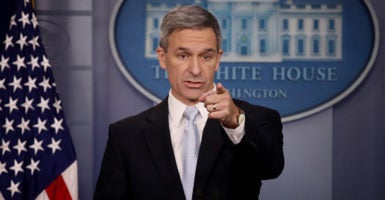 Ken Cuccinelli, acting director of U.S. Citizenship and Immigration Services, takes a question about immigration policy Monday at the White House. During the briefing, Cuccinelli said legal immigrants may not be eligible for green cards if they use certain welfare programs. (Photo: Win McNamee/Getty Images)

Federal officials will consider an immigrant’s use of welfare benefits such as food stamps and Medicaid as a negative factor in deciding on the eligibility of the immigrant’s permanent legal residency or on a temporary visa.

“It will also help promote immigrant success in the United States as they seek opportunity here,” Ken Cuccinelli, acting director of  U.S. Citizenship and Immigration Services, told reporters Monday at the White House. “Throughout our history, self-reliance has been a core principle in America.”

The Department of Homeland Security placed the regulation in the Federal Register on Monday, and it goes into effect Oct. 14.

Authority for the regulation comes from a 1996 bill that passed with bipartisan support but previously was applied only to legal immigrants who get cash benefits such as Temporary Assistance for Needy Families or Supplemental Security Income.

“Since 1996, the law has required foreign nationals to rely on their own capabilities and the resources of their families, sponsors, and private organizations in their communities to succeed,” Cuccinelli said.

“However,” he said, “Congress has never defined the term ‘public charge’ in the law, and that term hadn’t been defined by regulation. That is what changes today with this rule.”

The rule will apply only to those applying for green cards or visa status after the regulation takes effect.

The concept has been in U.S. law going back generations.

“The public charge requirement is a long-standing principle of U.S. immigration law, first implemented at the federal level in 1882,” David Inserra, policy analyst for homeland security at The Heritage Foundation, told The Daily Signal.

“However, the [meaning] of public charge has been poorly defined. The administration’s new rule simply defines … the public charge requirement to reflect today’s system of government benefits,” Inserra said.

The rule says an immigrant seeking to be a permanent resident with access to U.S. citizenship must not be reliant on U.S. welfare programs.

“This rule protects U.S. taxpayers by ensuring that new immigrants to the U.S. will not add even more spending on top of welfare and entitlement programs that are already unsustainably driving American debt higher and higher,” Inserra said.

“It also ensures that the U.S. is granting permanent residency to those who are self-sufficient, rewarding such immigrants with the privilege of staying and working in the U.S. and eventually gaining access to American citizenship.”

Cuccinelli, former attorney general of Virginia, did not have an estimated dollar figure on how much it costs taxpayers to pay for legal immigrants’ welfare benefits, but said:

The benefit to taxpayers is a long-term benefit of seeking to ensure that our immigration system is bringing people to join us as American citizens—as legal permanent residents first, who can stand on their own two feet, who will not be reliant on the welfare system—especially in the age of the modern welfare state, which is so expansive and expensive, frankly. So, that self-sufficiency that has been a central part of the American value set for so long is critical for us and for taxpayers going forward. That’s part of the motivation for a rule like this.

However, it will not affect programs pertaining to children, such as the Supplemental Nutrition Program for Women Infants and Children, or WIC;  the Children’s Health Insurance Program, or CHIP; benefits for pregnant women; foster care or adoption subsidies; or any public benefits for those who serve in the military.

The rule also will not affect refugees or immigrants admitted to the United States for asylum.