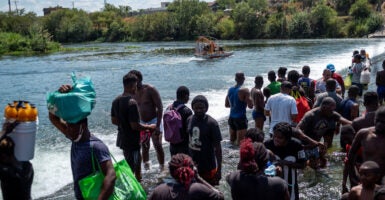 Francisco Javier Cuellar was killed by an illegal immigrant from Honduras in Jacksonville, Florida, in October. The assailant, 24-year-old Yery Noel Medina Ulloa, was released into the country and given a notice to appear in court after lying to border authorities about his name and age. Pictured: U.S. Border Patrol officers patrol the waters of the Rio Grande River nearby a temporary migrant camp in Del Rio, Texas. (Photo: Jordan Vonderhaar/Getty Images)

In the middle of heated political battles in Washington, D.C., it can become easy to forget the real, human toll that America’s porous border takes on United States citizens. The family of Francisco Javier Cuellar, however, is unlikely to ever forget.

The 46-year-old Cuellar was killed in Jacksonville, Florida, last month, allegedly murdered by an illegal alien from Honduras.

After entering the country illegally, Ulloa was taken in by Cuellar, and was given a job at the family business before allegedly murdering Cuellar. Immigration and Customs Enforcement detained Ulloa on Oct. 13, days after he was found covered in blood following the alleged murder. On the surface, Cuellar’s death seemed to have been entirely preventable.

We don’t know how Ulloa got from the Texas border to Florida, but we do know that the Biden administration has been flying illegal aliens to states across the country, including Florida.

State and local officials have warned the Biden administration that its anti-border policies pose a grave danger to the security of their state, and Florida Gov. Ron DeSantis, a Republican, blamed the administration’s secretive flights for Cuellar’s tragic death.

“That individual who was murdered was in fact murdered by an illegal alien who was on one of [President Joe] Biden’s flights, these midnight flights. Unannounced,” DeSantis said in a recent interview. “If Biden had not been doing that, if he’d been doing his job, that individual would be alive today.”

At the very least, Ulloa appears to have exploited the Biden administration’s immigration policies in order to gain entry into the U.S.

Weeks after taking office, Biden reinstated the Obama-era “catch and release” rule, which allows for the release of detained migrants into the U.S., before a court hearing. There is still a policy in effect called Title 42, which allows the U.S. to turn away migrants in order to mitigate the effects of the COVID-19 pandemic. This is one Trump-era policy that Biden has technically kept on the books, but has still managed to gut.

During the Trump administration, Title 42 was applied to all migrants seeking to enter the U.S., but the Biden administration has made broad exemptions for certain classes of migrants, including unaccompanied minors.

The Biden administration has not discussed how it is verifying the ages of these migrants, but comments made by White House press secretary Jen Psaki earlier this year gave a window into the administration’s thinking.

When asked about how the administration was verifying the claims of pregnant women, another group exempt from Title 42, Psaki responded with her trademark condescension and dismissiveness.

If the White House was this dismissive about the possibility of women faking pregnancies to get into the country, it’s a good bet that it has the same stance on people claiming to be minors.

The Biden administration appears intent on bringing as many unvetted migrants into the country as possible, regardless of the consequences. Cuellar is far from the first victim of America’s unsecured border, and likely won’t be the last. This time, the blood is on Biden’s hands.