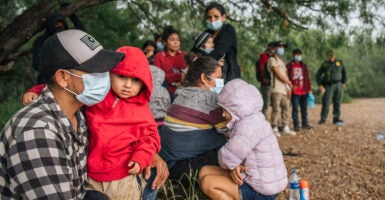 It was another bad day in court for President Joe Biden. On Tuesday, the U.S. Supreme Court ordered the administration to reinstate the Migrant Protection Protocols implemented by Biden’s predecessor.

Since the day he entered office, Biden has stifled immigration enforcement, resulting in historic numbers of aliens entering the country illegally. States, fed up with the fallout from these negligent policies, have sued to reinstate Trump-era enforcement practices halted by the Biden White House.

The sudden influx of many thousands of Afghan refugees fleeing Taliban rule only complicates the dire operational reality facing the Department of Homeland Security. That alone should prompt the administration to turn border enforcement programs back on. In the meantime, courts are starting to order as much.

In April, Texas Attorney General Ken Paxton and Missouri Attorney General Eric Schmitt sued the administration to reinstate the Migrant Protection Protocols (informally known as the “Remain in Mexico” program) to curb the criminal and humanitarian crisis at the border. This policy, authorized by Congress in 1996, allows immigration officials to return asylum applicants across the border to await the conclusion of their asylum proceedings.

Faced with the “migrant caravan” phenomenon, then-President Donald Trump implemented the policy in 2019. It quickly put an end to migrants crossing the border, making fraudulent claims of fear, and then disappearing into the interior while those claims were being assessed. The caravans came to a halt.

Combined with other border security measures, the Remain in Mexico program brought the brewing border crisis under control. The number of illegal encounters fell from a high of more than 144,000 in May 2019 to a low of about 36,500 in January 2020.

Starting on Day One in office, Biden set about systematically undoing this highly successful approach. He halted construction of the border wall and the Remain in Mexico program. He gutted immigration enforcement, ripped up agreements with Central American governments, and ceased using Title 42 authority with unaccompanied children illegally crossing the border.

The U.S. District Court for the Northern District of Texas permanently enjoined the secretary of homeland security’s June 1 memo pulling the plug on Migrant Protection Protocols. The U.S. Supreme Court on Tuesday denied the administration’s request to stay the district court order.

In handing down the order, District Court Judge Matthew Kacsmaryk noted that the administration: (1) knew the Migrant Protection Protocols had been found effective by DHS as a matter of policy; (2) knew the protocols had been successfully defended in court previously; and (3) had received warnings during the Biden transition about the consequences of repealing the Migrant Protection Protocols.

The order also noted that the June 1 DHS memorandum contained no discussion or analysis of the department‘s previous assessment that the Migrant Protection Protocols removed “perverse incentives” and decreased the number of migrants attempting to illegally cross the border. The judge further found that the termination of the Migrant Protection Protocols has contributed to the current border surge.

“By ignoring its own previous assessment on the importance of deterring meritless asylum applications without ‘a reasoned analysis for the change,’” Kacsmaryk ruled that the Biden administration acted arbitrarily and capriciously.

The U.S. government appealed to the 5th U.S. Circuit Court of Appeals, requesting a stay of the lower court’s order. The 5th Circuit denied the administration’s request and the Supreme Court has affirmed that denial. Now, DHS should fully and faithfully implement the district court’s order.

The administration should not slow-roll the restart of the Migrant Protection Protocols. Rather, it should immediately begin turning migrants back to Mexico in key sectors, with a projected time frame to begin asylum hearings in 60-90 days, just as the Trump administration did when it first stood up the successful program.