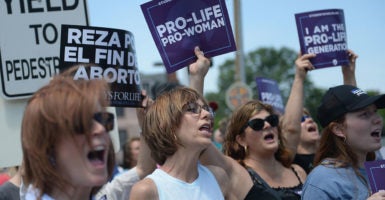 Planned Parenthood has chosen its devotion to abortion on request over the needs of the women it claims to serve. Pictured: Pro-life women chant June 4 during a rally outside a Planned Parenthood clinic in St Louis, Missouri. (Photo: Michael B. Thomas/Getty Images)

The Planned Parenthood Federation of America is a very curious health care provider. Begun long ago as a birth control organization when contraceptives were contraband, the organization evolved rapidly to adapt to the themes that preoccupied its famed leaders.

First, of course, was Margaret Sanger, who combined her commitment to birth control with an embrace of negative eugenics and rampant writing about “human weeds” and segregation of the “unfit.”

Later, the organization attracted a bipartisan array of private funding sources, and then public sources, by adopting national security and population control themes.

This vision of Planned Parenthood’s work has faded over time, even if population control remains among its prime objectives and major donors include elites such as Warren Buffett and Bill and Melinda Gates.

Today, the Planned Parenthood Federation of America is one of the wealthiest nonprofit networks in the nation. Its annual revenue was $1.66 billion in the last reporting year. It has total net assets of $1.88 billion, and excess revenue over expenses last year alone was $244.8 million—nearly a quarter of a billion dollars.

With the recent controversy and litigation over the Trump administration’s “Protect Life Rule” ending grants to groups that perform abortions in their family planning programs, one thing should be immediately clear: Planned Parenthood has more than enough excess annual revenue on hand—four times as much as needed–to replace the $60 million in grants it is forfeiting because of its decision to forgo federal Title X money because of the administration’s action.

A second thing requires some research, but the historical data shows that, even with rising taxpayer funding over the past decade, Planned Parenthood’s client base for contraception has been shrinking. In fact, that base has declined by 20%—nearly 460,000 unique clients—since 2009. The organization is defying gravity and doing less with more.

But not in every area of endeavor. With respect to abortion, Planned Parenthood’s aggressive program, deplored even by some of its rivals in the industry, is thriving.

Planned Parenthood cleverly downplays its role in abortion by counting all individual services it performs and citing abortion as a low percentage overall. But in terms of revenue and core advocacy, providing abortions is central.

Consider that this is exactly what Title X of the Public Health Service Act, enacted in 1970 prior to Roe v. Wade, has prohibited from the very beginning.

Section 1008 of the law categorically states: “None of the funds appropriated under this subchapter shall be used in programs where abortion is a method of family planning.”

Planned Parenthood is just such a program, as Dr. Leana Wen learned recently when Planned Parenthood fired her as its new president for suggesting that the mission focus should be on health care and not politics.

But keeping Title X-subsidized clinics open using its own revenue is not what a political organization does. Nor is, of all things, complying with the Protect Life Rule by separating out abortion in the statistics and doing only neutral, nondirective counseling (under which the counselor makes no attempt to direct or promote a course of action).

In the wake of this defunding, attempted first by President Ronald Reagan and upheld by the Supreme Court but never implemented, some ask the question, “Where will the women affected go?”

It is impossible to prove there will not be some disruptions in provision of contraceptives if Planned Parenthood holds fast to its announced intention to turn women away, but consider the 21st-century truth about contraception and federal programs.

The government’s Title X program has not been cut by a single penny.  Other programs and projects will begin to take up those funds and clients.  More women have Medicaid coverage today, and no-cost contraceptive coverage mandates have affected most U.S. health plans.

One Planned Parenthood CEO in the Midwest remarked to Reuters after the passage of Obamacare in 2010 that the organization expected 15% fewer clients because women now could “go anywhere” for services.

The push is now on for over-the-counter distribution of oral contraception, still the most popular method of birth control.

Virtually every pharmacy in America, now dominated by large chain stores, has an entire section devoted to methods of barrier and post-coital birth control. Most doctors prescribe contraception. And nearly a dozen states now allow pharmacy distribution of orals without a prescription.

Even natural methods, which commonly require no medical supervision, are on the rebound, with sophisticated apps available to increase ease of use and reliability.

Last month, Planned Parenthood again chose its devotion to abortion on request over the needs of the women it claims to serve. Americans should be glad the nation is choosing a better path.