Undercover Videos Show Why We Must Defund Planned Parenthood 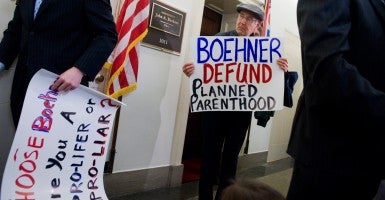 A video released last week by the Center for Medical Progress shocked the nation by showing an executive of Planned Parenthood sipping wine and casually talking about the going rate for the organs of aborted infants.

Yesterday morning, another undercover video compounded outrage toward Planned Parenthood’s activities. It once again raises the question of whether Planned Parenthood could be profiting off the sale of fetal tissue, as well as altering abortion procedures to preserve organs for sale.

Toward the end of the video, a Planned Parenthood executive jokes: “It’s been years since I talked about compensation, so let me just figure out what others are getting, and if this is in the ballpark, it’s fine, and if it’s still low, then we can bump it up. I want a Lamborghini.”

This should demonstrate to all Americans—even if they consider themselves “pro-choice”—that taxpayers should have nothing to do with this grim business.

Only yesterday, however, when asked whether the Obama administration would consider ending federal funding to Planned Parenthood, White House Press Secretary Josh Earnest gave a one-second answer: “No.” As noted by The Washington Free Beacon, Earnest thought Donald Trump’s latest activities were worth several minutes of discussion, evidently a far more important topic to the administration than whether an organization supported by taxpayers and applauded by President Obama has been trafficking baby organs.

Just as the killer Kermit Gosnell’s “house of horrors” abortion clinic was carefully ignored by the media until public outrage compelled news coverage, we’ve seen only the barest attention paid to the Planned Parenthood revelations. The headlines that do get published are carefully sanitized to reflect Planned Parenthood’s talking points—and to gloss over the children being dehumanized into mere livers, hearts and lungs.

But blaming news outlets and press secretaries for being hostage to their own ideologies will get us only so far. A story of this enormity couldn’t remain under wraps despite their best efforts (and worst journalism). Ultimately, it is our elected leaders who must answer for the continued activities of Planned Parenthood—and the support they receive from our tax dollars every year.

And answer they should: Planned Parenthood received over $528 million from taxpayers during their last reporting year.

One day all Americans will look back on the charnel industry of abortion with the same disgust and shame as we do other historical atrocities. Until then, Congress has an obligation to eliminate federal taxpayer funding for this industry’s largest representative, Planned Parenthood, an organization that performs 1 out of every 3 abortions in the United States.

Speaker of the House John Boehner has promised an investigation of Planned Parenthood’s alleged organ harvesting practices, and Sen. Rand Paul—a doctor himself—has vowed to fight federal funding for the institution. These are steps in the right direction.

For over two thousand years, since the Greek physician Hippocrates founded the science of Western medicine, doctors took an oath never to administer poison to destroy an unborn child. The least Congress can do is to keep our money from those who make such tragedy a business: defund Planned Parenthood now.