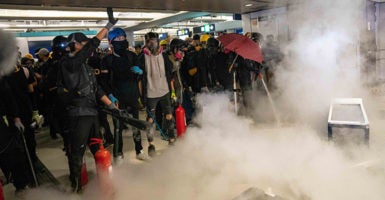 Protesters spray fire extinguishers during a pro-democracy demonstration at the Yuen Long subway station on Aug. 21 in Hong Kong. Protesters have continued rallies on the streets of Hong Kong against a controversial extradition bill since June 9, as the city plunged into crisis after waves of demonstrations and several violent clashes. (Photo: Billy H.C. Kwok/Getty Images)

President Donald Trump said on Wednesday that Chinese President Xi Jinping has the ability to ensure that chaotic protests in Hong Kong are resolved in a “humane way” and that the situation in the Chinese territory won’t be a factor in ongoing trade talks between the two countries.

Tens of thousands of freedom protesters in Hong Kong have been demonstrating for several weeks, as Chinese authorities have threatened to enact an extradition proposal.

China’s policy would expand the number of countries that suspected lawbreakers can be extradited to. That goes beyond the list of countries that Hong Kong has mutual extradition agreements with. Suspects who were tried in Hong Kong could also be taken to mainland China, which would mean fewer due process rights.

The so-called Umbrella Movement protests come as Trump is seeking to negotiate a new trade deal with China, but he said Hong Kong won’t become a bargaining chip in the trade talks with Beijing.

Protesters began carrying umbrellas to shield themselves from tear gas. The umbrellas then became a symbol of the freedom movement.

“I don’t view it as leverage. I hope Hong Kong works out in a very humane way,” Trump told The Daily Signal during a press gaggle before departing for Louisville, Kentucky, to speak to a veterans convention. “I don’t view it as leverage or non-leverage. I hope it works out in a humane way. And I think that President Xi has the ability to make sure that happens.”

Britain handed control of Hong Kong over to China in 1997 with an agreement on a “one country, two systems” policy that allowed Hong Kong to operate as a semi-autonomous, free democracy. However, China’s extradition push prompted the protests.

The report also urged that if China sends an armed intervention into Hong Kong, the United States should sanction Chinese officials, provide refugee status to Hong Kong residents, and cut off all trade talks with China.

During the press gaggle, Trump said the United States is already getting the best of China.

“China has been ripping us off [on trade] for many years. President Clinton, President Bush, and President Obama, and others should have done this long before me,” the president said, adding:

We are winning against China. They’ve lost 2-1/2 million jobs in a very short period of time. They want to make a deal,” he said. “This isn’t my trade war. This is a trade war that should have taken place a long time ago by a lot of other presidents. …