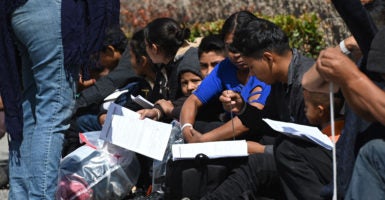 Conservatives warn the change could attract more illegal immigrants to the state and further burden a health care system without sufficient doctors.

“Providing a new public benefit to a group of people in the nation illegally will incentivize more people to risk breaking U.S. immigration law to settle in California,” Chuck DeVore, a former California assemblyman, said.

Prior to the bill’s passage, Californians under the age of 19 with an income below 266% of the federal poverty level were eligible to be enrolled in Medi-Cal, formally known as the California Medical Assistance Program, set up to serve low-income individuals.

The measure expands the existing program to young adults who are 25 years old or younger, regardless of immigration status. (Adults 19 and older are eligible for Medi-Cal if their household income is up to 138% of the poverty level; for pregnant women, the threshold is 213% or below.)

The budget allocates $98 million to pay for the changes beginning Jan. 1, covering about 90,000 low-income, illegal immigrants up to age 26, according to Pacific Research Institute, a conservative-leaning policy group in California.

“Providing access to health care coverage and services to all Californians is a key goal of [the Newsom] administration, and this serves as an important step toward accomplishing that goal, while building on the previous expansion of full-scope coverage to children,” wrote Carol Sloane, spokeswoman for California’s Department of Health Care Services, which administers Medi-Cal, in an email to The Daily Signal.

President Donald Trump appeared to reference California’s decision to extend health care coverage to illegal immigrants earlier this month, telling reporters: “If you look at what they’re doing in California, how they’re treating people, they don’t treat their people as well as they treat illegal immigrants. So at what point does it stop? It’s crazy what they’re doing. It’s crazy. And it’s mean, and it’s very unfair to our citizens.”

“The exclusion of undocumented elders from the same health care their U.S. citizen neighbors are eligible for means beloved community members will suffer and die from treatable conditions,” Buiza said, according to NPR.

Sally Pipes, president and CEO of Pacific Research Institute, told The Daily Signal the new law will incentivize young illegal immigrants to go to California to benefit from the program.

Pipes explained that the weight of new Medi-Cal costs—roughly $98 million at a minimum estimate—will fall on California taxpayers.

“Of course, it will hit middle-income earners most. That’s what most people are,” Pipes said. “A lot of these people are having a hard time affording premiums and deductibles already. Now they’re going to have to support people who are coming here illegally, when they’re having trouble paying for themselves.”

Newsom did not respond to The Daily Signal’s request for comment from the governor about how the state plans to pay for the new program.

“To help pay for expanding Medi-Cal and to subsidize health insurance premiums, California has enacted its own individual mandate, imposing a tax on those who fail to buy insurance,” DeVore said, adding that the estimated cost of $98 million is likely very low.

The Sacramento Bee reported in late June: “To pay for those [health care] subsidies, the state will fine people who don’t buy insurance through a policy known as the individual mandate, which was first implemented as part of the Affordable Care Act. … It’s expected to bring in roughly $1 billion for premium assistance over three years.”

Although the individual mandate penalty will finance expanded subsidies in Covered CA, this coverage isn’t extended to illegal immigrants in California, Pacific Research Institute says, pointing to page 12 of this report.

The penalty is $695 or 2.5 percent of income, whichever is greater, for those who don’t purchase coverage.

Pipes says the subsidy rate—the level of income at which California residents will be eligible for Medi-Cal—also was increased.

The eligibility threshold for Medi-Cal is 138 percent of the federal poverty level, according to the California Department of Health Care Services.

The same bill signed by Newsom to expand Medi-Cal for illegal immigrants, Pacific Research Institute notes, also expands eligibility for older and disabled residents to those at or below 138% of the poverty level starting Jan. 1, at a cost of $124.9 million, according to page 7 of this report.

“They’re increasing the subsidy rate from 400% under Obamacare to now up to 600% of the poverty level,” Pipes said.

Under Medi-Cal, Pipes said, doctors are paid approximately 40% less than what they would get for treating a regular patient.

“A third of the population is on Medi-Cal already,” she said. “Adding more people to Medi-Cal means that there are fewer doctors taking medical patients, because of the low reimbursement. It’s going to be harder to get a doctor at all, and if they do, the wait is going to be very long.”

“Being entitled to Medi-Cal doesn’t mean that the estimated 90,000 newly-covered people will be able to see a doctor,” DeVore said.

“In fact, Medi-Cal recipients often must wait six to nine months before receiving medical attention,” he added. “As a result, they continue to use California’s overburdened emergency rooms where Medi-Cal recipient use nearly doubled from 2006 to 2016.”

Future Expansion Under This Governor

Pipes said she expects Newsom is not done with the Medicaid program, and will continue to push its expansion.

The law requires appropriations from the Legislature in order to be enacted, either through the annual Budget Act or another appropriations measure, according to the legislative counsel’s digest.

With a Democratic supermajority in the California Assembly, Pipes said, she does not anticipate any successful opposition to funding the new program.

This report has been modified to clarify and correct eligibility requirements for California’s Medi-Cal and Covered CA programs.