This California Mayor, an Immigrant Himself, Explains Why He’s ‘Very Proud’ to Deport Illegal Immigrants From His City 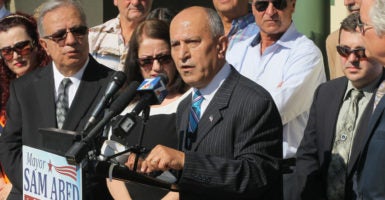 “I am very proud, you know, as an immigrant, as a leader of this city, to have deported 2,700 illegal criminals from our community and made our community safe,” says Sam Abed. (Photo: Charlie Neuman/ZUMA Press/Newscom)

Sam Abed, the mayor of Escondido, California, took pride in deporting illegal immigrants from his city and said he wants a repeal of the state’s sanctuary laws Wednesday on Fox Business’ “The Evening Edit.”

“I am very proud, you know, as an immigrant, as a leader of this city, to have deported 2,700 illegal criminals from our community and made our community safe,” Abed said. “Escondido’s crime rate went down 48 percent since our cooperation with ICE. And Escondido today is as safe as it was in 1980.”

“I was sworn to defend the Constitution and also to keep my community safe,” Abed continued. “So this is a personal issue to me. This is at the core of my mission as mayor.”

“When Jerry Brown cares more about illegal criminals than he cares about the Hispanic community and the American citizens, this is insanity, and this is unconstitutional,” Abed told Trump. “When I swore to be a citizen and again as mayor, I swore to defend the Constitution and to keep my community safe. This is personal to me. I’m going to work hard to make sure our community’s safe.”

“I’m going to go back to California tonight, and we’re going to start a pact to make sure that we will repeal the sanctuary state altogether,” Abed concluded on Fox Business.