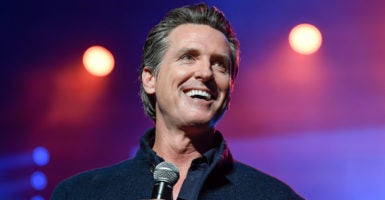 “There’s 3.4 billion reasons why it is a challenge,” California Gov. Gavin Newsom says of legislation in the state Assembly that would cover all illegal immigrants over the age of 19, costing the Golden State an estimated $3.4 billion. (Photo: Steve Jennings /WireImage/Getty Images)

California Gov. Gavin Newsom’s plan for government-funded health care for illegal immigrants is frugal compared to proposals by other Democratic leaders in his state.

Newsom, the progressive first-term governor of California and ardent opponent of the Trump administration, wants to offer free health care services to low-income illegal migrants between the ages of 19 and 25. The plan is estimated to cost the state $98 million a year to operate.

“Young people feel the crunch of the cost crisis acutely—from high rents and student debt. Health care shouldn’t be one more worry,” Newsom said in a press release. “We are helping young adults when they come off their parents’ plan and assisting those who may not be able to join onto a parents’ insurance policy.”

Despite the nearly $100 million annual price tag, Newsom’s plan appears conservative when contrasted with the options being touted in the California state capitol.

A bill in the state Senate calls for not only 19- to 25-year-olds, but also those 65 years and older to qualify for free health care. The author of the bill argues California’s budget could easily afford the burden. In the state Assembly, there is legislation that would cover all illegal immigrants over the age of 19, costing the Golden State an estimated $3.4 billion. The state House proposal earned scrutiny from Newsom himself.

“There’s 3.4 billion reasons why it is a challenge,” the Democratic governor said during a recent press conference.

Leaders in the state Assembly and Senate are expected to finish their proposals within the week before they negotiate with Newsom on a final budget. No matter how the plans are tweaked, California appears poised to become the first state in the U.S. to offer government-funded health care to illegal immigrant adults.

Additionally, implementation of the proposals would further establish the liberal state as a counter to the Trump administration’s immigration agenda.

The White House, for example, is considering a regulation that would dramatically expand the deportation of immigrants living in the U.S. who are dependent on public benefits. President Donald Trump’s immigration plan, which he introduced earlier in May, would reduce the number of low-income foreign nationals allowed into the country.

The California GOP panned Democrats for pushing publicly funded health care for illegal migrants while simultaneously mulling a plan that mandates health insurance and slaps a penalty on those who choose not to participate.