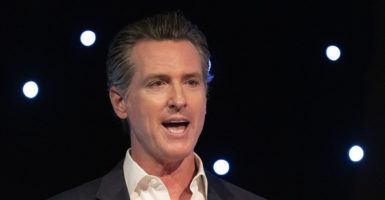 California is at it again with a proposal to extend free health care to illegal immigrant senior citizens.

President Donald Trump, who made the border wall and stopping illegal immigration a central plank of his 2016 presidential campaign, took a jab at this policy.

“If you look at what they’re doing in California, how they’re treating people, they don’t treat their people as well as they treat illegal immigrants,” Trump said in a speech at the time. “So at what point does it stop? It’s crazy what they’re doing. It’s crazy. And it’s mean, and it’s very unfair to our citizens.”

Trump is right. California has waged a war on the concept of citizenship by essentially sidestepping the will of the American people and intentionally undermining immigration laws.

Worse, by extending social welfare to those illegal immigrants, the state is signaling that the concept of citizenship itself is meaningless.

It’s clear that California’s craziness doesn’t stop, as Newsom and the state’s Democrats have doubled down to extend free health care coverage to even greater numbers of illegal immigrants.

Newsom’s latest proposed budget now aims to extend free health care coverage to illegal immigrants 65 years old and older as a part of the state’s Medi-Cal program. This would add $80.5 million to the budget this year and $350 million annually once fully implemented, according to Politico.

Newsom has made a push to extend health care coverage to everyone in the state, including those who aren’t legal citizens.

“We believe universal health care lowers the cost for everybody,” Newsom said. “We believe the evidence bears that out. We believe it’s the right thing to do morally and ethically. We also believe it is the financially responsible thing to do.”

Is this the responsible thing to do? Beyond the issue of ignoring federal law, there is obviously a price to pay for covering the cost of health care for what could be millions of illegal immigrants.

Right now, California is flush with cash, in part because the American economy is booming and the tech sector is bringing in a huge amount of capital to the state. But what happens when there is a downturn with this explosion of future financial liabilities?

Remember, less than a decade ago, California’s politicians sought a bailout from the federal government to deal with a massive budget hole.

And a lot of the wealth the state needs to fund its massive tax-and-spend ways may simply dry up.

Many businesses in the state already have pulled up stakes rather than deal with onerous taxes and regulations.

Middle-class Californians are leaving the state in droves or say that they want to leave. The pressure to do so will be even greater if jobs dry up.

On top of that, the state has been hit with a massive homelessness crisis, a jarring sign of dysfunction when contrasted with notable pockets of opulence.

To that point, although California is doing its best to encourage illegal immigration and add newcomers to the dole, it’s also finding ways to kill jobs for people looking to make ends meet.

Recently enacted legislation has made freelance work nearly impossible, and represents the kind of lunacy that has gripped the political and intellectual powers that be in the Golden State.

For those wealthy enough to enjoy the fruits of California’s many notable benefits—wonderful climate, beautiful landscape, and interesting cities—things are going fine.

But for those not so fortunate, the state is becoming increasingly inhospitable, the result of a toxic stew of bad laws, failed promises, and misplaced blame.