Since 2006, Over a Million Californians Have Left the State 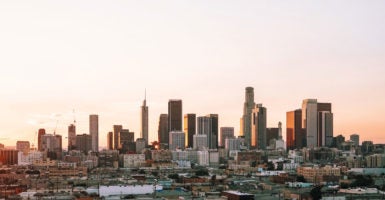 California liberals and Democrats are three times more likely than Republican and conservative residents to describe the state as “one of the best places” to live. (Photo: Calvin Bak/EyeEm/Getty Images)

More than half of California’s registered voters have considered leaving the state, and 40% of that number represents Republicans or conservatives, according to a study by the University of California, Berkeley.

Conservatives and Republicans surveyed mentioned the state’s expensive housing, high taxes, and liberal political culture as their primary reasons for wanting to leave California, according to the September study conducted for the Los Angeles Times.

“We’re moving to redder pastures,” former California resident and conservative Judy Stark, 71, told the Times. “We’re getting with people who believe in the same political agenda that we do: America first, Americans first, law and order.”

California liberals and Democrats are three times more likely than Republican and conservative residents to describe the state as “one of the best places” to live, the study found.

More than 1 million California residents have moved out of the state since 2006, the Times reported citing a 2018 report from the California Legislative Analyst’s Office. About 63,000 Californians moved to Texas in 2017, according to the Times, citing a 2019 relocation study by Texas Realtors.

In the last 10 years, California welcomed 100,000 new residents with household incomes of $120,000 or higher—85% of which moved to the Bay Area, according to the Legislative Analyst’s Office report.

California’s increasing home costs, which stem from its growing home shortage, could be the result of a combination of factors, including strict state regulations, high taxes, the California Environmental Quality Act, and permanent residents who do not want to give up land space for the homeless population, the San Francisco Chronicle reported.

Silicon Valley tech giants, who have brought hundreds of thousands of jobs—and with them, even more people—to the same area in California, have committed a total $4.5 billion to help combat the state’s crisis.

High taxes and the state’s political culture were the second- and third-most cited responses, 58% and 46%, respectively, from registered voters as the main reason they are considering leaving.

“And now you come along saying, ‘It’s not our problem. It’s the private sector’s problem.’ This is how they escape responsibility for the problem,” DeMaio continued.

California’s massively devastating wildfires, too, are driving people from the state, according to an Oct. 29 New York Times report, though wildfires are not mentioned in the Berkeley study.

“We have lived here since 1966, but we have now decided to leave California because it has become unmanageable,” California resident Martha Ture told The New York Times in an email. “The fire danger and strong winds will not get any better in the coming five years and we are in our 70s.”

Democratic California Gov. Gavin Newsom blamed the wildfires on climate change, but some experts disagree with his theory.

President Donald Trump, too, has blamed California Democrats like Newsom for the state’s troubles.

“The Governor of California, [Gavin Newsom], has done a terrible job of forest management. I told him from the first day we met that he must ‘clean’ his forest floors regardless of what his bosses, the environmentalists, DEMAND of him. Must also do burns and cut fire stoppers,” Trump tweeted Sunday.

“Every year, as the fire’s rage [and] California burns, it is the same thing-and then he comes to the Federal Government for $$$ help. No more. Get your act together Governor,” he continued.

“Also, open up the ridiculously closed water lanes coming down from the North. Don’t pour it out into the Pacific Ocean. … California desperately needs water, and you can have it now!” Trump concluded in reference to the way the state disperses its water among the natural environment, farmland, and urban residences.