Californians Double Down on Progressivism. Here’s Why It’s a Problem for Red State Neighbors. 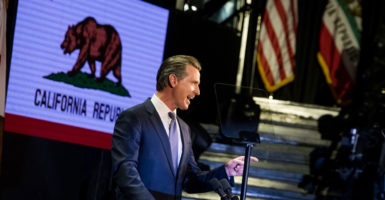 Much of the nation saw political shake-ups on Tuesday. Not so in California.

The Golden State continued its trend of drifting increasingly to the left.

Lt. Gov. Gavin Newsom, a Democrat, easily defeated Republican businessman John Cox to become the state’s 40th governor, and Sen. Dianne Feinstein retained her Senate seat. She was up against another Democrat due to the state’s “jungle primary” system.

Democrats also picked up seats in Congress and the state Legislature, while progressives generally prevailed on the litany of state ballot initiatives. A proposition that would have repealed the new state gas tax went down in defeat.

A big question now is whether Newsom will continue to drag California to the left, doubling down on the radicalism of the Legislature, which even liberal Gov. Jerry Brown kept in check to a certain extent.

That California is becoming a one-party state with increasingly left-wing policies is well known. But the ripple effect from this is that Californians are leaving the state for redder pastures—red states with more hospitable tax and regulatory regimes such as Texas, Arizona, and Nevada.

As I wrote in July: “A study from the Bay Area Council, a public policy organization, found that 46 percent of San Francisco residents have plans to move out of the area, a jump of 12 percent since 2016. Of those who participated in the survey, 61 percent said they planned to leave the state, with Texas being a primary destination.”

But why would a Californian—excuse my bias as a Bay Area native—leave that beautiful state, with its incredible weather, awe-inspiring landscapes, and endless forms of entertainment?

Loony straw bans are only the tip of the iceberg. Progressive policies have made large swaths of the state almost impossible for a middle-class family to live in. Finding the state unaffordable, more and more middle-class Californians are leaving in droves, or at least say they want to leave when they get the opportunity.

Progressive policies—high taxes, building restrictions, and overbearing environmental regulations—drove up the cost of living and made housing unaffordable.

This is not to mention the open border and sanctuary city policies that only add to the impression that California is becoming an increasingly lawless state of surging crime.

Some California refugees understand this, but sadly, many others don’t. Or they ignore the fact that their policy preferences are the true cause of the dysfunction that has hampered what is perhaps the best piece of real estate in the union.

This is a big problem for neighboring states that receive an influx of voters who have felt the crunch of progressive policies, yet continue to vote for Democrats. They seem to be unfazed by the fact that the policies they fled were Democratic policies to begin with.

That’s why Americans, even those who have no desire to replicate California’s worst policies, need to pay attention to what happens in the left coast’s laboratory of terrible ideas.

They could, literally, be coming to a town near you.