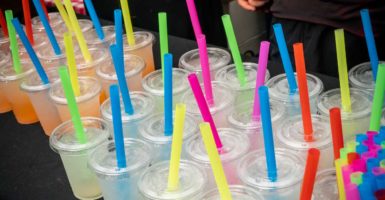 After a ban on non-biodegradable utensils went into effect over the weekend in Seattle, local officials are advising food service businesses to “[s]top using plastic straws and plastic utensils.”

An ordinance pending before the New York City Council would make that city’s food service businesses the next front line in liberal politicians’ war on plastic straws.

For the last two months, the New York City Council has deliberated over a bill that would make it a civil offense for any food service provider in the city to offer customers straws or stirrers “made of plastic or any other non-biodegradable material.” If passed, violators could face a fine of $100 for their first peccadillo and steeper fines for repeat offenses.

Supporters of straw bans argue that serious global pollution problems demand drastic local solutions—particularly, the use of non-biodegradable straws. And they have a point: Plastic straws cannot be recycled and they can be blown into waterways.

Still, New York’s proposed law—and others like it—may be a problem in search of a solution.

It rides on a wave of plastic straw laws coming out of California cities: Malibu, Davis, and San Luis Obispo have each passed ordinances that restrict the distribution of plastic straws in restaurants.

A broader environmentalist campaign against plastic straws and stirrers reaches from Seattle to Miami Beach, Florida.

The rules in each city vary. Some, for example, carry criminal penalties, while others do not. Miami Beach targets straw delivery to beachgoers, while Seattle prohibits plastic straws, stirrers, and cocktail picks in restaurants throughout the city. The single purpose behind all of these rules, however, remains to combat pollution.

When Malibu officials proposed a plastic straw ban, they cited figures familiar to many an eco-justice warrior, claiming that “500 million single-use plastic straws are discarded per day across the nation.”

That figure was first recorded in 2011 by Milo Cress, at age 9, after he “asked manufacturers how many straws they produce a day.” Since 2011, that data has been featured by various entities ranging from Cress’ own nonprofit, Eco-Cycle, to the National Park Service.

To their credit, New York City Council members are not relying on data created by a 9-year-old. They are, however, relying on data that has no clear connection to New York.

City Council member Rafael Espinal explained: “It’s no secret that we have a plastic problem. It is estimated that there are 13 million metric tons of plastic clogging our oceans and that 100,000 marine creatures die from plastic entanglement every year.”

If New York City officials want to address global pollution, they have options other than passing a new law.

Of course, they can engage with volunteers to clean up local waterways that feed into the ocean. They can work with local businesses, who already have strong interests in keeping their facilities clean, to promote public awareness of the issue. But they need not try to legislate a solution, because there are already more littering laws than you can shake a straw at.

New York City sanitation regulations (§ 16-118) provide that “[n]o person shall litter … any … rubbish and refuse of any kind whatsoever, in or upon any street or public place … ,” subject to fines of $50 to $250 or more for repeat violations.

Surely, the phrase “of any kind whatsoever” is broad enough to cover plastic straws and stirrers, but there’s more.

The New York City Department of Parks and Recreation also provides that littering or misusing a waste receptacle, polluting park waterways, and “unlawful dumping” are all separate offenses.

And two separate New York state laws prohibit littering on highways and adjacent lands and on railway or subway tracks.

With all of those tools at their disposal, officials seem to have covered the waterfront. They should not pretend that another local law is necessary to reduce pollution. Outcomes from less ambitious policy experiments suggest as much.

For example, Illinois amended state law to specifically criminalize littering cigarette butts in 2014. However, in 2015, volunteers with the Alliance for the Great Lakes were still picking up more cigarette butts around Lake Michigan than any other trash item, just as they were before the new law took effect.

What the straw ban movement may need is a more localized analysis of the costs and benefits of proposed rules. By comparison, non-plastic alternatives often cost more, do not hold up as well to hot liquids, are not as widely available as plastic straws, and individuals with certain disabilities need straws to drink. Those factors may give rise to unintended consequences of plastic straw bans.

Research has also cast doubt on the benefits of straw bans. “Bans can play a role” in addressing ocean pollution, says oceanographer Kara Lavendar Law, but “[w]e are not going to solve the problem by banning straws.”

Scientists have estimated that all the plastic straws littering global coastlines represent less than 1 percent of the approximately 8 million tons of plastics that enter the oceans each year, while abandoned fishing equipment accounts for a much larger piece of the problem.

Straw bans may not offer much of a solution to those problems.

What they can do is compel covered restaurants to eat the cost of their existing plastic straw and stirrer inventory, purchase more expensive biodegradable straws and beverage stirrers and pass those costs on to customers, and open their businesses to bureaucrats checking inventory for non-biodegradable straws.

Never mind that restaurant workers must already comply with health codes covering, among other tasks, properly taking out the trash—which can be amended if necessary to address any blow away straw problems.

The nonprofit Riverkeeper, for its part, helps clean the Hudson River by promoting volunteer events like Riverkeeper Sweep. Established in 2011, the event has brought together 10,000 volunteers to collect 191 tons of waste.

Rather than waste tax dollars on straw sting operations, local officials should encourage private and nonprofit action and enforce the laws that are already on the books.

Another new law is not always the answer.