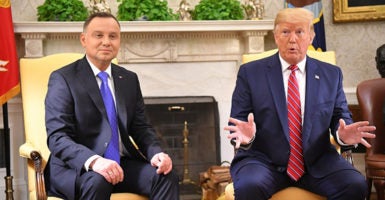 From the perspective of a country counting itself as the “best barometer” of concern about Russia’s aggression, President Donald Trump is anything but soft on the government of Vladimir Putin, a top Polish official in the U.S. says.

Trump pledged last month to put 2,000 more U.S. troops in Poland, at a time when that nation is wary not only because of its own distant history with Russia but because of Russia’s invasions of Georgia in 2008 and Ukraine in 2014. The U.S. already has about 4,000 troops in Poland.

“It couldn’t be clearer that the president is far from … cozy with Russia,” Maciej Golubiewski, the New York-based consul general of Poland for the U.S., told The Daily Signal in a recent phone interview.

“Poles, I think, are the best barometer of what it means to be cozy with Russia, because we are the closest ones who understand the threat,” Golubiewski said.

Trump met June 12 at the White House with Polish President Andrzej Duda. Trump is set to travel to Poland in September, where he is expected to announce Poland’s inclusion in the Visa Waiver Program during his second visit to the country.

Golubiewski recalled Trump’s July 2017 speech in Poland, a strong defense of America’s Western allies and a critique of Russia that was widely regarded as one of Trump’s best foreign policy speeches.

The United States is the “sole guarantor for security in Europe,”  Golubiewski said, and Poland will provide the infrastructure for the division headquarters of American troops, which some call “Fort Trump.”

Trump’s announced troop buildup is a “visible and permanent commitment on the part of the United States,” the Polish official told The Daily Signal.

“Some studies that appeared recently showed that if Europe were to go it alone, in terms of defending itself against potential Russian attack on the Eastern plank, it would take around 20 years for Europe to reach the capacity … to mount an effective defense and pushback,” Golubiewski said.

Having been invaded by both Germany and Russia, he said, Poland, like Eastern European countries, has a better understanding of threats after the Cold War than other countries do.

“In a lot of Western Europe, there is not enough of an appreciation of conventional military threats that arise on Europe’s borders,” Golubiewski said. “It was in vogue in the late ’90s, early 2000s to talk about ‘We just have to have small, agile special troops,’ that terrorism would be the most common threat. People tend to forget conventional threats. Countries still invade other countries.”

He pointed to Trump’s push for more NATO countries to pay the required 2% of gross domestic product toward national defense as another defense against Russia. Of the 28 NATO member nations, the United States and Poland are among the eight nations that pay the full 2%.

A Year of Anniversaries

Trump’s September visit to Poland will come on the 80th anniversary of Germany’s invasion of Poland, which started World War II.

In June, Poland marked 30 years since the once-communist and Soviet-alligned nation held its first mostly free election and voters rejected all communist candidates at the end of the Cold War.

While the presidencies of conservative Ronald Reagan and progressive Woodrow Wilson seem quite far apart, both were instrumental for Poland at key moments, Golubiewski said.

“All those anniversaries should rank very loudly in the ears of the Americans,” he said, adding:

That notion of freedom—in many countries in the West, during old times when the first pilgrims were reaching the states, there was absolutism in Europe. There were absolutist kings [in Europe]. Poland was a rare exception. We had relatively weak kings and our society was ruled locally.

We had a lot of freedoms that in Europe [were] a rarity. That’s also why Poland welcomed so many Jews, because they were escaping persecution from Western Europe. A lot of those anniversaries should be close to the American heart. We wouldn’t be where we are without the close friendship and alliance with the U.S.

Golubiewski, a native of Lodz, Poland, who lived in and around Washington, D.C., for many years, holds a bachelor’s degree in philosophy, politics, and economics from Washington and Lee University in Virginia.

At Odds With EU

Poland has clashed with the European Union over Duda’s reforms of his country’s judiciary and on immigration matters.

“Poland is a very loyal member of the European Union and doesn’t want to contest the laws of the EU, but also believes that EU bureaucracy should be faithful to the letter of the treaty,” Golubiewski said. “Just like the U.S. Constitution, certain matters are reserved to the states. So it’s a bit of a similar situation where you have [a] federal versus states’ rights debate.”

A complex judiciary system in Poland that wasn’t reformed when the country moved to democracy in 1989 allowed older Soviet judges to remain on courts.

When Duda tried to replace such judges, Polish opposition leaders accused him of a power grab to politicize the courts. The EU sued to stop the move.

“The judiciary in Poland has had a great deal of autonomy, including ruling itself—a very, very different system than the United States where we don’t have as much democratic oversight over the way judges are picked,” the Polish official said.

He said that in the U.S., for example, the president nominates judicial candidates who must be questioned and confirmed by the Senate before they take their seats as judges.

“What the government wants to do is increase legitimacy and democratic oversight, in line with what you have in the United States, which balances the judiciary with other branches of the government,” Golubiewski said.

“We are in a dialogue with the EU. This is a civil and formal dialogue. We are trying to ensure that this reform is agreeable to all the parties involved.”

Poland also has been more resistant to accepting Syrian refugees and immigrants into the country without stronger vetting than the EU would prefer.

“We oppose unilateral actions by some countries that invite immigrants to enter, then ask that they be de facto forcefully relocated to other countries, because they cannot deal with them because there are too many,” Golubiewski said. “So, this again falls outside the competencies of the EU to ask for such a thing.”

The diplomat stressed that Poland is open to immigration.

“We are actually the second country in the EU behind Great Britain with the number of economic migrants,” he said. “We don’t have a problem with legal immigration and legal movement of people. We have to observe the rules.”