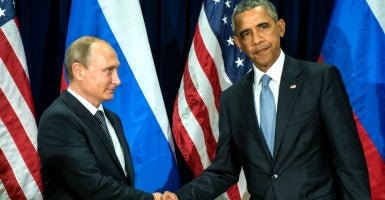 Russia’s aggressive military intervention in Syria poses major problems for the United States, its allies, and the future of Syria. It is likely to make a bad situation worse by propping up the Assad regime, intensifying the fighting, and driving more Syrian refugees out of the country.

Secretary of State John Kerry doggedly tried to put a positive spin on the situation yesterday, telling CNN that the Russian intervention could spur some kind of diplomatic action:

But Russian President Vladimir Putin had other ideas. He seized the opportunity to call for a Russian-led international coalition against the Islamic State terrorist group (also known as ISIS or ISIL); unveiled an intelligence-sharing agreement among Russia, Syria, Iran, and Iraq; and quickly launched air strikes against Syrian rebels, catching the Obama administration flat-footed.

Not only did Putin’s unilateral actions disrupt the administration’s diplomatic dreams of multilateral cooperation in resolving the Syrian crisis, but the abrupt start of Russia’s air campaign without coordinating with the United States stunned Pentagon officials.

One anonymous senior official told CNN: “Our presidents just talked about setting up de-confliction talks and now they just go ahead and do this? They cannot be trusted.”

Secretary of Defense Ashton Carter accused Russia of “pouring gasoline on the fire” and pledged to continue U.S. air strikes in Syria against the Islamic State despite Russian warnings to keep American warplanes away from its operations.

To make matters worse, while Moscow claims that it is targeting the Islamic State, its initial round of air strikes actually hit moderate Syrian rebel groups, including Western-backed groups trained and armed by the CIA.

A leader of the Liwa Suqour al-Jabal rebel group, which is affiliated with the Free Syrian Army, claimed that Russian warplanes attacked his unit.

Putin’s aggressive intervention and contemptuous disregard for American interests make for yet another slap in the face for the Obama administration, which is reeling from a series of crises spawned by the disastrous failure of its Middle East policies and the collapse of its naive “reset” policy toward Russia.

After the Obama administration elevated its short-term political interests over long-term U.S. security interests in Iraq; failed to recognize the threat posed by ISIS, which the president famously dismissed as a “J.V. team”; and pursued a strategy of wishful thinking in Syria, it should be no surprise that Putin has tried to exploit U.S. mistakes.

The fact that the Obama administration was shocked by Russia’s latest intervention and is scrambling to salvage its failed policy in Syria is a sign that the real “J.V. team” is in the White House.