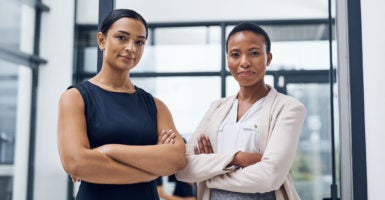 June's employment numbers were particularly good for African Americans, with the unemployment rate dropping to 6%, nearing the historic 2018 low of 5.9%. Women, Hispanics, and workers without a college degree are seeing similar trends. (Photo: Getty Images)

The U.S. economy is in the midst of the longest economic expansion in our history—more than 10 years of consecutive growth.

The climb out of the Great Recession has been prolonged and strengthened by pro-growth policies, such as tax cuts and deregulation.

Rolling back those reforms or burdening workers with new restrictions would present the biggest threats to continued prosperity for American workers.

The strong U.S. economy continues to offer new opportunities to people who have historically been left behind.

Average wages have grown above 3% for 10 straight months—twice as fast as inflation. And since the tax cuts of 2017, wage growth for the poorest 25% of workers has reached post-recession highs of 4.4%.

In the most recent data from the Federal Reserve Bank of Atlanta, the highest-income workers’ wages are growing at a more modest rate, more than a percentage point lower than those of low-wage workers.

June’s unemployment rate remains close to its 50-year low at 3.7%, and the 224,000 jobs created last month is more than double the number needed to keep pace with population growth and demographic change.

For Americans who want a job, they are readily available. June’s employment numbers were particularly good for African Americans, with the rate dropping to 6%, nearing the historic 2018 low of 5.9%. Women, Hispanics, and workers without a college degree are seeing similar trends.

Previously unemployed Hispanic and black working-age women are finding jobs faster than any other demographic group.

Washington politicians don’t have the ability to create jobs or long-run opportunity. When they try, they most often fail. However, as we are seeing today, when Washington takes even a small step back, businesses thrive, and the prosperity is shared with working Americans.

On the other hand, proposals such as a national $15-an-hour minimum wage could wipe out close to all the jobs gains over the past year, according to the Congressional Budget Office.

New spending priorities from the progressive left would leave lower-income Americans sending more than half of their earnings to the government to pay for expanded one-size-fits-all programs. That’s a reality that already exists for European taxpayers.

New taxes and wage mandates are not the only threat to America’s current economic revival. Washington’s current brazen unwillingness to constrain spending growth is already dragging down our economy’s potential.

In the first nine months of 2019, federal tax revenue increased by 3%, compared with last year, thanks to the larger economy. Over the same period, federal spending grew by 7%, and Congress is set to vote on bills to increase spending growth even more in the coming months.

Last year’s 25% tariff on nearly all steel imports increased steel prices by as much as 40% in the following months. Americans who paid those higher prices had less to spend on, and save for, other priorities.

Our strong economy is a testament to the powers of good, pro-growth policy in areas where taxes have been cut and regulations rolled back.

If taxes stay low, spending is constrained, and tariffs are eliminated, the economic revival happening across the United States can continue.

There are still millions of Americans who have not re-entered the workforce after being sidelined during the Great Recession. And while wages are growing and income inequality is falling, this should be only the beginning of the positive trend.

When Washington gets out of the way, American businesses and all the workers they employ thrive.