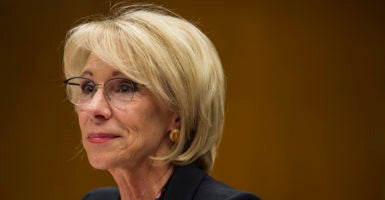 The NAACP’s support for a moratorium on new charter schools across America has put the nation’s oldest civil rights group at odds with three of its local branches—and in California, of all places.

Not only that, but the local NAACP chapters appear to agree with Education Secretary Betsy DeVos that charter schools offer valuable opportunities to black students.

DeVos, a longtime school choice advocate who some on the left paint as anti-minority, says the NAACP’s adoption of a charter school moratorium three years ago doesn’t reflect the views of black parents and students she has spoken with.

“There’s a disconnect between the leadership of the national [NAACP] organization and some of the local chapters … and parents and students,” DeVos said in a recent interview with LA School Report. “I think there is a clear disconnect.”

All three branches submitted resolutions to the state NAACP’s board opposing the national organization’s 2016 ratification of a resolution calling for a moratorium on charter school expansion.

The NAACP resolution called for a moratorium on charter school expansion until:

—Charter schools are subject to the same transparency and accountability standards as public schools.


—Public funds are not diverted to charter schools at the expense of the public school system.

—Charter schools cease expelling students that public schools have a duty to educate.

—Charter schools cease to perpetuate de facto segregation of the highest performing children from those whose aspirations may be high but whose talents are not yet as obvious.

Some local NAACP branches, however, offered their own resolutions to end the moratorium on opening new charter schools.

“We’re hopeful that it can be adopted in California, and then the national board will do their research and investigate the facts in order to look at this again from the perspective of what is really going on with the African American students locally, statewide, and nationally,” said Christina Laster, education chairwoman for the NAACP’s Southwest Riverside branch.

Under NAACP rules, a local branch can submit a resolution when it disagrees with the national board. The national board will review the resolution before the group’s annual convention, but all branches ultimately must abide by policies set from the top.

“It sounds like NAACP branches are breaking ranks with the California state NAACP and national board,” Myrna Castrejón, president and CEO of the California Charter Schools Association, told LA School Report.

“Everybody knows black students are the lowest-performing subgroup, other than students with special needs, and the system has done nothing to provide targeted support,” Castrejón said.

According to the San Diego NAACP branch’s resolution, African American student groups have a “severe and persistent” achievement gap throughout the state in math and English language arts.

The resolution also notes how well African American students are performing in charter schools compared to traditional public schools. Only 10 public schools in California with a majority African American student enrollment fall in the top half of student performance statewide in English and math, according to the resolution, but eight of the 10 are public charter schools.

“I think they’re totally mistaken,” DeVos said about supporters of a charter school moratorium in California in the LA School Report interview, “and they’re not really acting or speaking in the best interests of those they profess to represent.”

The secretary of education said that one need only talk to a student who has benefited from school choice to understand her point of view.

The California Hawaii NAACP has called for the three local branches to “rescind their position because it conflicts with the state branch position” as led by its education chairman, Julian Vasquez Heilig.

“I don’t think anybody would characterize Betsy DeVos as a civil rights leader,” Vasquez Heilig said in a phone interview Monday with The Daily Signal. “I just don’t think she really has any standing in this conversation.”

Vasquez Heilig has been at the forefront of the national NAACP board’s push for charter school restrictions in California as a professor of educational leadership at California State University, Sacramento. In early June, he was named dean of the University of Kentucky College of Education and was expected to take that post this month.

“We haven’t made any modifications to the California charter school law in decades,” he said.

“Julian Vasquez Heilig hacked the NAACP to serve his own anti-charter political agenda,” Parmley told The Daily Signal in an email. “Shame on him for exploiting a trusted civil rights organization to trap black kids in failing schools and deny black parents the right to choose where their children go to school.”

“Everybody knows black kids are being massively failed by the public school system,” she added. “It’s ironic that Dr. Heilig would try and shut down those within the NAACP who support public charter schools from using the same resolution process he used himself to call for a moratorium. Sure doesn’t sound very democratic.”

I think everybody is very aware that while the California Charter School Association will tell anybody who will listen to them that they’re in favor of transparency and accountability for charter schools, behind the scenes, they’re spending tens of millions of dollars and working hard to make sure that does not happen.

California lawmakers in May withdrew two bills that would have threatened the growth of charter schools: Assembly Bill 1506, which sought to cap that growth, and Senate Bill 756, which would have imposed a two-year moratorium on charter schools.

The bills were part of a package of four measures to restrict charter schools, first introduced in February by Assemblyman Patrick O’Donnell, D-Long Beach, chairman of the Assembly Education Committee.

O’Donnell said the bills would ensure officials “make responsible and informed decisions” and would be “critical for student success and taxpayer accountability.”

AB 1505 would give local school districts exclusive authority to approve new charter schools. The bill also would allow districts to assess a proposed charter school’s budget impact during that approval process, and rescind existing law that gives charter school officials the right to appeal a denial.

Vasquez Heilig has said the measure is “commonsense transparency and accountability, and has a really good shot in the state Senate.”

The second remaining bill, AB 1507, would amend current law to prohibit a charter school from being located outside district boundaries when organizers can’t otherwise find a facility. Critics say such situations create budget costs for the adopted district.