Forgiving Student Debt Is Not the Way to Ensure Economic Freedom 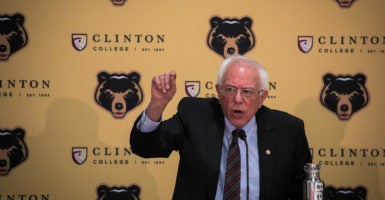 Sen. Bernie Sanders, I-Vt., tweeted: “Are you truly free if you graduate hundreds of thousands of dollars in debt? Are you free if you cannot pursue your dream because you don’t make enough to cover your student loan payments?" Pictured: Sanders addresses the crowd at Clinton College, a historically black college, before a rally in Rock Hill, South Carolina, on June 22. (Photo: Logan Cyrus/AFP/Getty Images)

In today’s dynamic society, we have a general consensus that investments in time and effort, such as excelling in the classroom and earning degrees, help to achieve intended goals.

But when it comes to financial investments in our futures, especially in the case of student loans, consensus surrounding sacrifices and consequences associated with the pursuit of freedom seems to be waning.

As the latest and most public example, consider Sen. Bernie Sanders’ stance on the subject. He would have us believe every student is forcefully saddled with thousands of dollars in debt without a say in the matter.

Are you truly free if you graduate hundreds of thousands of dollars in debt? Are you free if you cannot pursue your dream because you don’t make enough to cover your student loan payments? We will #CancelStudentDebt because there is no freedom without economic freedom.

He interprets financial duties, such as the repayment of student loans and credit card debt, as inherently malevolent because they restrict economic autonomy.

Sanders’ recently unveiled plan tries to cure the nation’s $1.6 trillion in student debt through more big government, which is what got us here in the first place.

There’s no surprise here. Sanders called for similar debt relief during his 2016 campaign and has treated government intervention as a panacea for four decades.

Sanders is right that costs of higher education have risen substantially in recent decades and that it is a problem for Washington because 90% of all student loans are now controlled by the federal government. But government largely has made that problem worse.

For every dollar of increase in federally subsidized student loans, tuition has increased by 63 cents.

Sanders’ policy aims to help young adults affected by increases in education, health care, and living costs, but it runs a real risk of rewarding reckless financial behavior when Americans are more financially illiterate than they’ve been in recent history.

Recent surveys and studies have found only 57% of U.S. adults are financially literate and that 76% of millennials lack basic financial knowledge, which is why they’ve racked up $1 trillion in student debt. This financial illiteracy manifests as confusion, panic, and pessimism.

Today, 70% of millennials are stressed and anxious about saving for retirement, and 22% feel overwhelmed about their finances. These statistics highlight larger lapses in our institutions, but it’s wrong to put all the blame on the financial entities that provide the loans.

Students are free to choose whether they take out loans, solicit other loans, or completely forego them. Students and their financial institutions mutually agree to take on their respective financial responsibilities.

For their own benefit, we should not be giving students a hall pass on their debt. If we do, students’ financial unawareness will continue to increase.

The disproportionately poor and minority students who eschew loans and instead work their way through college will be doubly disadvantaged. Not to mention those who already paid back their debts.

Sanders is quick to take a swipe at Wall Street banks, but making students carefree by forgiving debt doesn’t mean ensuring their economic freedom. It simply means that someone else may be taking responsibility for their decisions.