What Was Iran Thinking in Shooting Down a US Drone? 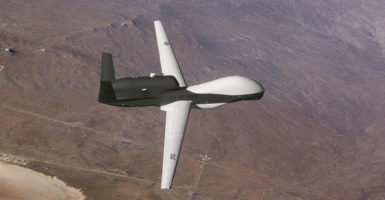 Pictured is an Air Force variant of the RQ-4A Global Hawk, the drone shot down by Iran over the Strait of Hormuz. (Photo: USAF/Getty Images)

U.S.-Iran tensions just reached a new level: Iran shot down an American drone. In today’s episode, we unpack the situation with Tom Spoehr, director of The Heritage Foundation’s Center for National Defense and a former Army general.

Plus: Days after Rep. Alexandria Ocasio-Cortez, D-N.Y., compared U.S. migrant detention centers to Nazi concentration camps, a Polish member of Parliament is inviting her to Poland to rethink her comparison. Rachel and Daniel discuss.

Daniel Davis: U.S. officials are considering how to respond to Iran having shot down a U.S. drone. The two countries dispute whether it was shot down in international airspace, but, of course, the larger backdrop is one of ongoing tensions in the region.

To unpack it all, we’re joined by Tom Spoehr. He is the director of The Heritage Foundation’s Center for National Defense and served as an Army general.

Tom, thanks for being with us today.

Thomas Spoehr: Thanks for having me.

Davis: And just for our listeners, we are recording this on Thursday, so there may be further developments after this.

So Tom, how much do we know at this point about what happened with the drone shooting?

Spoehr: We know a great deal. This type of air travel is recorded. It’s on radar, and so there’s a history of it. So, we know for a fact that the drone was operating in international airspace.

A lot of people don’t know what that means. That means you’re 12 miles away from the shore of a nation, or something like that, so up and down, 12 miles away.

In international airspace, operating at a fairly high altitude, a U.S. Navy drone was shut down by an Iranian surface-to-air missile. Then it fell and crashed into the Gulf of Oman.

Rachel del Guidice: Tom, would you say that this incident was an act of war?

When World War I—when Archduke Ferdinand was assassinated, one country took that as an act of war, but there is no playbook on what’s an act of war.

You can stand down from what would seemingly be a very hostile act if two countries agree not to consider it an act of war.

It’s an unmanned drone, so it’s not as provocative as, say, if somebody had lost their lives, or things like that. I don’t think we’re at a place yet where war is imminent.

Davis: This comes just a week after the attack on two oil tankers in the Gulf of Oman. It makes you wonder. What do you think could be motivating Iran to act so provocatively like this?

Spoehr: That’s a great question. I don’t think anybody really knows what’s going through their heads when they do this because it’s commonly believed they’re making themselves look worse and worse as day goes on.

They’re operating under some fairly significant sanctions that the United States is leading. You could probably surmise they’d like to get out from under those sanctions.

It’s hard to understand how attacking oil tankers, shooting down our drones, is going to relieve them of these sanctions.

It’s also hard to understand how that will gain them any friends in the international community, especially if somebody gets hurt.

del Guidice: Tom, why do you think that the president has been so cool so far on this issue? We’ve seen him be very strong on threats in the past, but not as much yet.

Spoehr: The president at his core does not want to get us entangled in any overseas engagements more than he has to, more than absolutely required for the national security of the United States. So, he views this currently as as a place where we can still pull back.

We don’t have to engage in hostilities, and he believes this for a number of different reasons. One, obviously, he doesn’t want to put U.S. lives on the line unless there’s a vital U.S. national security interest.

The second is these wars are costly and he’d like to reduce our overseas costs of defense operations. So, he’s got that.

I also think he’s getting advice from a broad base of folks that say, “Hey, nothing has happened yet that we can’t stand down from.”

Davis: How do you think Iran’s nuclear ambitions factor into their own thinking here?

I saw a report, maybe you can verify this, that they’re about six months away from having a nuke? Would you say that that’s a reliable report?

Spoehr: … We have clear evidence that Iran for decades has been interested in pursuing a nuclear weapon.

It’s only in 2003 they put those plans aside for a little bit when they saw what happened in Iraq when the U.S. went in there. I think we think that sent them a message that might not be a good idea.

They’ve got this longstanding desire to have a nuclear weapon. … I think the current tensions we’re seeing are probably more about trying to get the sanctions relief than to restart their nuclear program.

As you suggest, they’ve made hints that they’re starting to refine uranium again, trying to bring it up more than there is allowed by the the agreement and in greater percentages of purity. I don’t think we should make much of that. That’s really just posturing, I think.

del Guidice: Leaders of both the United States and Iran have said that they don’t want war, and yet we seem to be inching closer and closer to it. What would war with Iran look like?

Spoehr: I don’t even know that we know what it would look like. I think probably it would be a series of smaller type operations.

But assuming that this escalates, I think you would see, if the president decided it was necessary, some sort of retaliation and it would probably be proportional and very limited.

For example, in the case of this drone strike, it wouldn’t be too unreasonable to see us attacking the same launchers that launched the missile that brought down the drone.

The same thing with the tanker attacks. Let’s say that happens again. Maybe the United States, or with its partners, would choose to attack the naval ships and the bases from which these attacks originated.

That’s the type of thinking typically you see when we’re trying to keep things at a lower level.

Davis: Would you expect that gas oil prices will rise out of this? I know there’s so much oil that comes right through this strait. Do you expect there to be an economic impact of this?

Spoehr: Yeah, there is an economic impact. I don’t know what a barrel of crude is at today. I was hearing it was a couple of dollars up.

I also saw people talking about if this had happened five or 10 years ago, the price of oil would have got up $20, $30 a barrel.

Because there are so many other sources now in the world for oil, including the United States, we’re much less dependent on getting oil through the Straits of Hormuz.

Most of Asia still gets a lot of oil through the Straits of Hormuz. The Western nations really not as much anymore. So I think unless the straits completely close, we’re not going to see oil go through the roof.

Davis: Just to go back here, you mentioned a proportional strike in response. Do you see that escalating further, Iran being emboldened by that to lash out again, or do you think at some point they would back off and realize, “OK, we don’t want this”?

You always hope that this stops at the lowest level possible.

We saw that when President Trump decided to retaliate against Syria for using chemical weapons. He very specifically went after the facilities and the aircraft that they were using to deliver the chemical weapons. Didn’t go to Damascus, didn’t go anywhere else outside those parameters.

Davis: All right. Well, Tom Spoehr, thanks for coming in. We appreciate your time today.

Spoehr: It was my pleasure. Thank you.