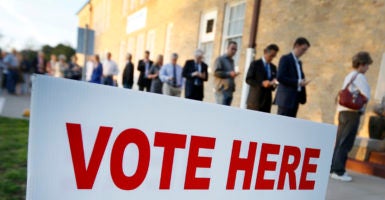 The Electoral College is under fire. Again.

Sen. Elizabeth Warren, D-Mass., recently proposed killing it on the grounds that the presidential selection mechanism leads candidates to focus on just a handful of “swing states” that are most likely to determine the election.

If presidents were picked via a nationwide popular vote, she implies, candidates would journey more widely, going anywhere there are potential votes to be won.

While it’s true that presidential candidates concentrate on swing states, there is no electoral system that would push them to tour all of the nation’s 3,007 counties, 64 parishes, and 41 independent cities.

All electoral systems, including the Electoral College, enshrined in the Constitution create incentives to home in on a limited set of places that are most likely to determine the outcome.

Given these two realistic alternatives, the Electoral College system is far healthier for the country as a whole.

Warren is right that presidential candidates would likely travel to places like Massachusetts and California if the Electoral College were replaced by a nationwide popular vote. These states and the cities therein have enormous shares of the population.

But would candidates travel to Jackson, Mississippi (pop. 166,965), where Warren issued her proposal? Probably not. And would they take a swing through the Rust Belt, the Corn Belt, or the Bible Belt? Not a chance.

Like all states, New York selects its governor by a statewide popular vote. Gov. Andrew Cuomo has governed the state for eight years and still has not visited three of its rural counties. Ten other counties have seen the governor only once.

By contrast, Cuomo has made 601 trips to New York City and another 223 trips to the three suburban counties surrounding the Big Apple. If the Electoral College were done away with, presidential candidates, like New York governors, would home in on big cities and rarely set foot anywhere else.

The reason swing states are swing states in the first place is because they are fairly evenly divided between Republicans and Democrats, urban and rural areas, industry and agriculture. They are, in a sense, a microcosm of the nation’s various cleavages writ small.

Because these pivotal states are won by such small margins and because there are relatively few of them, presidents have the incentive and the time to travel throughout town and country, metropolis and mining town.

When swing states cease to be closely contested, they cease to be swing states. Ohio, Florida, New Hampshire, and Colorado are only on the front lines of the war for the White House now because they happen to have a relatively equal mix of right-leaning and left-leaning factions.

But that won’t be the case forever.

Partisan fault lines will move. The demographics of swing states will shift. Eventually, other states will become the battlegrounds of presidential contestation.

So, in time, Mississippi may well get its chance to host the quadrennial maelstrom just as deep-blue California and dark-red Arkansas once did.

Densely populated metropolitan areas—whether they line the Pacific or Atlantic, the Great Lakes or the Gulf of Mexico—share much culturally and have similar economic interests. (Large cities, after all, tend to be where large corporations and big banks are headquartered.)

Do away with the Electoral College, and these same cities would be determining the outcomes of presidential elections for decades into the future.

Given the great diversity of interests spread across our country, a system that forces candidates to compete in every region makes sense. Those who seek to become the leader of these United States should not be encouraged to ignore “fly-over country” to concentrate on currying favor among a handful of mega-cities.