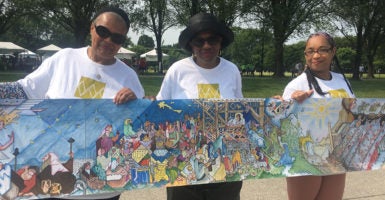 More than 600 volunteers gathered recently on the Nation Mall in Washington, D.C., to unfold the longest illustrated Bible in recorded history.

The Wiedmann Bible, nearly a mile in length, was painted by German artist Wilhelm “Willy” Wiedmann over the course of 16 years.

Willy Wiedmann’s son, Martin Wiedmann, discovered the 3,333 images and sketches after his father’s death in 2013.

“My father died six years ago,” Wiedmann told The Daily Signal at the June 1 event. “I was cleaning out his attic, his gallery, and I found four big aluminum boxes. When I looked in them, I found a lot of paintings. Initially, I did not know what they were, but luckily, he also left the answer in one of those boxes. He had written a memoir.”

Wiedmann explained that when he read his father’s memoir, he discovered that creating an illustrated Bible had been his father’s life’s dream.

“He felt that mankind needed a visual representation of the Bible,” the artist’s son said. “He stated [in his memoir] that there are around a billion people [on the planet] who are illiterate, people who can’t read and write, and this is one way for them to engage with the Bible.”

The artist painted the entire Old and New Testaments in a style he created and termed “Polycon.”

“He invented the Polycon style,” Wiedmann said of his father. “He even invented the word. It’s not registered. ‘Poly’ stand for ‘many,’ and ‘con’ [stands for] etches; so, ‘many etches.’”

The work of art contains “elements of cubism, surrealism, abstract expressionism, and other [20th-century] avant-garde styles,” said Amy Van Dyke, lead curator of exhibitions at Museum of the Bible in Washington, D.C. “It expressed the content of the Bible with color, rhythm, edge, and beauty, but also passion.”

The original Wiedmann Bible is currently on display at the museum until September. The museum’s CEO, Ken McKenzie, worked with his team to plan the June 1 unfolding event on the Mall.

“Because it has been so much fun to have this particular artifact at the Museum of the Bible,” McKenzie explained, “we thought, ‘Well, let’s share it with the city. Let’s wrap it around the Mall and meet all of our neighbors.’”

The event marked the third time the Wiedmann Bible has been completely unfolded, but the first time in America. The two previous occasions were in Germany.

The copy of the illustrated Bible that was unfolded stretched all the way around the Reflecting Pool. Volunteers arrived early in the morning to take their place along the Mall to hold sections of the Bible.

Pauline Cook, holding a portion of the Old Testament, said she decided to volunteer her time because she had seen the artwork at the Museum of the Bible and wanted to support the endeavor.

“It seems like he [Wiedmann]  was pretty true to Scripture, and that is important to me,” Cook told The Daily Signal.

Two friends, Glenda Foxx and Frankie Mitchell, were enthusiastic about helping with the unfolding, finishing each other’s sentences as they expressed their support for the project.

“It is God’s word … . To see the art itself, just to see what it represents, it is really amazing,” Foxx said.

A publicist for the Wiedmann Bible Foundation, Diana Lammerts, said there are plans for future unfoldings in America.

“There will be some news coming soon,” Lammerts said. “We are planning on other locations as well. It is not set in stone yet, but there are several locations interested. Martin is always up for suggestions, so if someone else says, ‘We want it here,’ they can just contact us.”