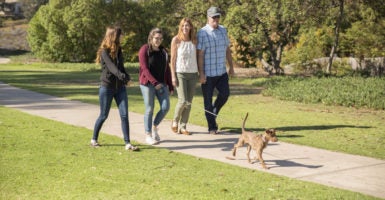 James Slatic was sitting in a breakfast meeting when he heard the news.

An employee who worked for him and his medical marijuana business, Med-West Distribution, called to tell him he arrived at Med-West’s facility in San Diego, California, to find “25 police cars” outside.

It was Jan. 28, and on that day, an estimated 30 armed agents with the San Diego Police Department and Drug Enforcement Administration raided Med-West, a company that manufactures cannabis oil cartridges for medical use, according to court filings.

The company has complied with state medical marijuana laws, registered with the city of San Diego and paid taxes to the IRS, the state, and the local government, Slatic, Med-West’s CEO, told The Daily Signal.

But the agents with the task force ended up seizing computers, records, equipment, and more than $324,000 from Med-West.

Police also arrested two employees working that day, but they were released and never charged with a crime.

“It was like a scene out of a bad movie,” Slatic said.

But for Slatic, the movie didn’t end there.

In total, law enforcement seized $55,258 from James Slatic’s checking and savings account, $34,175 from Annette Slatic’s account, and a combined $11,260 from Lily and Penny Cohen’s savings accounts—money designated to pay for college.

“This is the dirty secret of the justice system,” Slatic said of civil forfeiture. “When you’re a family person that’s been a law-abiding citizen and something like this happens, when you talk to the person on the street and say you’re a legal, licensed, regulated, tax-paying business, people are like, ‘Oh, they can’t do that.’”

“Well,” he continued, “that’s what everybody thinks, but unfortunately they can.”

A spokeswoman for the San Diego County District Attorney’s Office said the investigation into the Med-West and the raid conducted is ongoing, and the case under review.

“The primary mission of the asset forfeiture program is to enhance public safety by removing the proceeds of crime and other assets relied upon by criminals to perpetuate their criminal activity,” Tanya Sierra said in an email to The Daily Signal.

In the nine months since the family’s money was seized, police haven’t charged anyone with a crime.

Federal prosecutors declined to prosecute Med-West, as an amendment included in the federal budget for 2015 prohibits the Justice Department from prosecuting people acting in accordance with their state’s medical marijuana laws.

The company, however, ultimately shuttered. As a result, Slatic said 35 people lost their jobs.

“We’re going into debt while we fight what we consider to be an illegal government seizure,” Slatic said. “But we’re hopeful that our family will get justice and our kids will get their college savings back.”

Civil forfeiture is a tool that gives law enforcement the power to seize cash, cars, and property if they suspect it’s tied to a crime.

But civil forfeiture opponents point to cases like Slatic’s as evidence that police are abusing the tool and using it to put more money in their coffers.

According to a November report from the Institute for Justice, law enforcement in California forfeited nearly $280 million from 2002 to 2013.

“The zeal shown by police has crossed into abuse, and the only thing they’ve accomplished is to take nearly half a million dollars from an innocent family,” Wesley Hottot, a lawyer with the Institute for Justice representing Slatic, told The Daily Signal. “This case isn’t about crime fighting. It’s about policing for profit.”

Med-West legally operated in California—the state legalized medical marijuana in 1996—but in an affidavit filed with the courts that led to the seizure of the Slatics’ money, San Diego police Detective Mark Carlson cited state law that prohibits “chemical extraction” to manufacture marijuana as part of their justification to take the money.

Slatic, though, said that Med-West refined oils, and didn’t extract them.

Additionally, the Institute for Justice said in court filings that the equipment found at Med-West’s facilities cannot be used for chemical extraction.

“Critically, the equipment that Carlson describes—a rotary evaporator—can only be used for refinement,” the documents state. “Indeed, it is impossible to use a rotary evaporator to extract cannabis oil from raw marijuana, as expert testimony at the hearing will show.”

In his affidavit, Carlson said that the building where Med-West was located contained a “sophisticated clandestine” laboratory and distribution center—a characterization Hottot refutes.

“All of this was being done not in a clandestine fashion, but across the street from a Mercedes-Benz dealership in a commercial building,” he said. “The government knew it was there. They had been paying taxes. They weren’t hiding. They had a public website that mentioned what they did.”

Despite the allegations against Med-West, Slatic and the Institute for Justice are challenging the San Diego County district attorney’s seizure of money from the family’s personal bank accounts.

Med-West is challenging the government’s seizure of the $324,000 in a different case, as a criminal investigation is ongoing.

The law firm argued that the government’s seizure of the money belonging to the Slatics and their children is a violation of the U.S. Constitution and the California Constitution.

Additionally, California state law requires that the government be able to “trace” forfeitable property to a crime, which, according to the Institute for Justice, the government cannot do.

“The government can’t seize every penny from a family based on the mere suspicion that one member violated the law,” Hottot said. “It’s not just wrong, it’s unconstitutional.”

Under the new laws, which take effect in January, law enforcement must secure a criminal conviction before forfeiting cash worth up to $40,000.

California is one of a handful of states that reformed their civil forfeiture laws this year, and legislation is making its way through the federal legislature.

Hottot, the lawyer with the Institute for Justice, said what happened to the Slatics demonstrates why further action is needed.

“There’s a troubling profit incentive for police and prosecutors to continue to do what’s happened here,” he said. “It has to stop, and we need major civil asset forfeiture reform in this country to make these sorts of seizures impossible.”

Hottot also said the Slatics’ case should serve as a “warning sign” for the American people in terms of how the tool is being used, particularly since law enforcement seized money not only from Slatic and his business, but also from his wife and daughters.

“If people knew how police and prosecutors can directly profit, I think they would be deeply troubled by how vulnerable their property is,” he said. “All it takes is one police officer alleging that one person committed a crime to take everything from an entire family.”