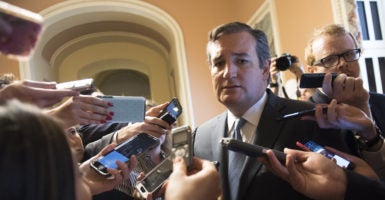 Tax reform is all about “the promise to remodel our antiquated, bureaucratic, ineffective tax system with the objective of creating more jobs, higher wages, more opportunity, with the objective of making it easier for a factory worker to pay for his son’s education,” Cruz said at a Capitol Hill event on tax reform Wednesday, adding:

Cruz said he thinks the current tax system, which includes seven tax brackets, should be simplified “to one simple flat tax.”

“In the presidential campaign, I campaigned across the country on a simple flat tax where we abolish the IRS. That remains the objective I would like to see,” the Texas Republican said.

The tax code should be simplified to the point that Americans will be able to fill out their taxes and file on a postcard, Cruz proposed.

“Every year, more than 90 percent of taxpayers seek help preparing their tax returns,” Cruz said. “For individuals and families, that costs roughly $99 billion a year. In 2016, Americans spent 9 billion hours on their taxes. Nine billion hours is a lot of time.”

Cruz said he thinks full and immediate expensing, which “would let businesses immediately deduct expenses from their income,” according to the Bloomberg Bureau of National Affairs, should be included in Republicans’ tax reform package and “is one of the most important reforms.”

“If you want to see jobs and growth and wages, you want full expensing … If you are a single mom working as a waitress, expensing makes it easier for a new restaurant to be built, creating new opportunities for you to get a better job and higher wages,” he added.

Lowering the corporate rate would also help keep jobs in America from moving to other countries, Cruz argued.

“We have the phenomenon called inversion where companies, longtime American companies, are being acquired by foreign companies or reincorporated so that their headquarters is overseas for one reason only, to escape the punitive American corporate tax system,” Cruz said, adding:

Repatriation, which is the “process of converting a foreign currency into the currency of one’s own country,” according to Investopedia, is another essential ingredient in tax reform, Cruz said.

Many of those companies would like to bring that money back here, would like to open new factories, would like to hire more American workers. But our current system penalizes them for bringing those dollars here.

So instead what do they do? They keep it overseas.

“We need to move to a territorial system that encourages people, ‘Bring your capital back, put it to use here in America, create jobs, create opportunity,’” Cruz said.

“The death tax is one of the most unfair aspects of our current tax system,” Cruz said.

It is especially harmful to small businesses, the Texas senator said.

The alternative minimum tax, created in 1969 to ensure that more affluent taxpayers could only lower their tax bill via deductions a certain amount, should be done away with, according to Cruz.

Many of them not super wealthy. And for millions more, they have to compute their taxes two ways … The alternative minimum tax is the opposite of simplicity. We should use the opportunity to end it, so you have one postcard and not two.

In a speech earlier on Wednesday morning, House Speaker Paul Ryan, R-Wis., predicted when the process would kick into high gear.

“On the week of Sept. 25, there’s going to be an outline that is released which reflects the consensus of the tax-writing committees—Ways and Means and Finance—and the administration,” Ryan said at a news conference. “Then the tax-writing committees are going to take feedback and input and then they’re going to go produce their bills in the weeks ahead. And so this is the beginning of the process.”

The last time the tax code was updated was in 1986, with President Ronald Reagan’s Tax Reform Act.

At a July event hosted by Freedom Partners, Chamber of Commerce, and Americans for Prosperity, Treasury Secretary Steve Mnuchin said tax reform would happen within the year.

President Donald Trump has also taken his tax reform agenda on the road, visiting Missouri at the end of August and North Dakota on Sept. 7.

Additionally, Trump has used Twitter to communicate his urgency on passing tax reform.

With Irma and Harvey devastation, Tax Cuts and Tax Reform is needed more than ever before. Go Congress, go!

The approval process for the biggest Tax Cut & Tax Reform package in the history of our country will soon begin. Move fast Congress!