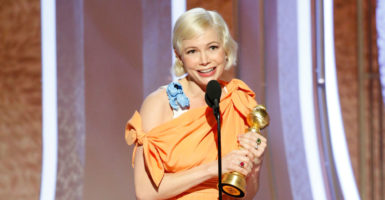 Actress Michelle Williams’ Golden Globe Awards speech was something that confirmed my desire to attend the March for Life. Her statement that the freedom to have an abortion was the reason for her success both saddened and shocked me into thinking of my own dreams and desires for the future. (Photo: Paul Drinkwater/NBCUniversal Media, LLC/Getty Images)

Abigail Moreno-Riano is a student at Regent University.

I’m very passionate about the dignity of women, and for that reason, all forms of sexual exploitation—whether it be pornography, prostitution, or sex trafficking—anger me, because they shatter a woman’s perception of herself.

My desire to see all women treated with respect and dignity is what has caused me to want to dedicate my life to freeing women from exploitive situations. But as a young person, I recognize that I can never expect to see the end of sexual exploitation in my lifetime until the idea of aborting a living, vulnerable human being is not first made inconceivable.

For that reason, I couldn’t agree more with the theme of this year’s March for Life: “Life Empowers: Pro-Life Is Pro-Women.”

The pro-life movement is pro-women. It rightly advocates for a woman’s personal dignity by fighting for her unborn child to be seen as a person, not as an object. When women are encouraged to see their own sense of worth and dignity—one that extends past the usefulness of their bodies—they are empowered to see their unborn children in the same way.

Though I have been passionate about the dignity of women and children for a while, this is the first year I will attend the March for Life. In understanding the gravity of this fight for the unborn and women alike, I have never seen it as more crucial for young women and future leaders to attend.

Ironically, actress Michelle Williams’ Golden Globe Awards speech was something that confirmed my desire to attend this year. Her statement that the freedom to have an abortion was the reason for her success both saddened and shocked me into thinking of my own dreams and desires for the future.

As a young woman, I recognize there are many challenges to having children and a career. To say women do not have to sacrifice anything to be mothers is completely false.

But as former model Leah Darrow encouraged women everywhere: “Babies don’t keep us from dreams.” She reminded women, me included, that babies won’t keep us from professional growth, but will “make [us] better because of it.”

The speakers for the March for Life this year include Louisiana state Sen. Katrina Jackson; abortion survivors Claire Culwell and Melissa Ohden; Elisa Martinez, executive director of the New Mexico Alliance for Life; and Marjorie Dannenfelser, president of the Susan B. Anthony List. All are women who have used their diverse platforms to represent the voiceless.

As a young woman, I look up to these leaders who have ignored party lines for the worthy cause of life.

This year, I’m compelled to go to the March for Life because it is also the centennial anniversary of the 19th Amendment, which granted women the right to vote.

It’s a monumental year to remember that we are not marching without influence, nor without the ability to truly change the culture. Those who fought for a woman’s right to vote, fought for women to use their voices not to shout—but to speak for those without a voice.

The industries of sexual exploitation survive by camouflaging exploitation as “freedom,” indoctrinating women to believe that their body makes them valuable, and therefore, that it’s “empowering” to have an abortion.

Through these industries, women are deprived of their sense of hope, worth, and identity—aspects that make us human—and see themselves as objects instead.

The cycle of degrading womanhood through sexual exploitation does not end at the woman’s body. It continues to the living child within her. And I realize that the fight for the honor and worth of women starts in the womb.

It starts with our privilege, strength, and ability to bring life into the world. It starts with fighting for the respect and consideration of unborn children, not because of their ability to be useful—but because they are human beings, already filled with the ability to dream and hope for the future.