Tunisia Is Showing Democracy Can Work in the Arab World 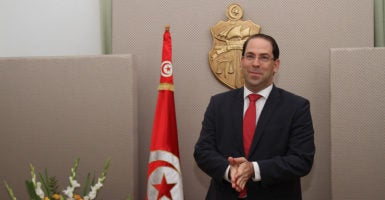 While violent civil conflicts have prevailed elsewhere in the Middle East since the Arab Spring of 2011, Tunisia has pursued a transition to democracy without bloodshed.

In 2014, the country made massive strides, adopting a new constitution, and then holding its first full parliamentary and presidential elections under that constitution.

As with any young democracy, Tunisia’s government continues to face daunting tasks. At the top of the government’s to-do list are revitalizing the economy and building the public’s confidence in a fledgling democracy.

That’s a tall order, and government leaders will need to continue working with Tunisia’s robust and vibrant civil society and youth population to make it work.

Job opportunities and training for the young are especially crucial, as they represent a huge slice of the population. They also, as the truism goes, represent Tunisia’s future.

To solidify their support for democracy, it is vital that the younger generation experiences, early on, the benefits of a free economy. Failure to meet expectations could result in disillusionment with democracy itself and bring the risk of instability.

On the broader economic front, structural reforms must be carried out more decisively to show that democracy can bring measureable prosperity for the ordinary Tunisian.

Tunisia has relied on international loans to jumpstart its economy in the face of increasing oil prices and decreasing tourism. However, failure to improve current economic conditions has less to do with financial support from international partners and more with Tunisia’s own shortcomings, particularly in following through on critical reform measures. Sweeping and more decisive regulatory reforms are needed to ensure economic growth and open opportunities to all Tunisians.

For the United States, Tunisia’s embrace of democracy makes the country a critical asset of untapped potential value. A steady and democratic Tunisia not only provides the U.S. with a strategic ally but also serves as a model for future democracies in the region.

Since the January 2011 revolution, the U.S. has committed more than $1.4 billion in aid to support Tunisia’s transition to democracy. U.S. assistance to Tunisia focuses on an array of targeted areas that include ensuring and enhancing internal and external security, promoting democratic practices and good governance, and supporting sustainable economic growth.

The success of Tunisia’s bottom-up pursuit of democracy and economic freedom will be a success for the United States, too. In a 2015 joint commentary, Kim R. Holmes of The Heritage Foundation and William B. Taylor of the Institute of Peace made the compelling case that Tunisia is a strategic partner in a region where stable, democratic allies are rare and critically needed.

The United States and Tunisia should continue to embrace their challenging yet rewarding partnership as the two counties move forward. The result can be a Tunisia that serves as an example of democracy for the larger Arab world.