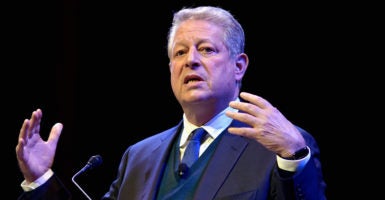 "The system of checks and balances that has protected the integrity of our American system for more than two centuries has already been dangerously eroded,” says former Vice President Al Gore, pictured at Harvard University in 2016. (Photo: Paul Marotta/Contributor/Getty Images)

Gore issued his warning in a speech to Harvard University students and faculty Wednesday, stressing “reason” and “rational debate,” indeed democracy itself, were under threat from the “ideology of authoritarianism.”

Science “is now being slandered as a conspiracy based on a hoax,” Gore said, likely referring to a 2012 Trump tweet where he called man-made global warming a “Chinese hoax.”

“The subordination of the best scientific evidence to the cynical greed of those buttressing the power of a would-be autocrat is yet another strategy for controlling policy by distorting and suppressing the best available information,” Gore said.

“So the ideology of authoritarianism is not only a threat to democracy in America, now because of the attacks on climate science, it has become a threat to the survival of human civilization as we know it and even potentially to the capacity of the human species to endure,” Gore continued.

“In order to solve the climate crisis, we must solve the democracy crisis,” Gore said.

While Gore, a Harvard alumni and producer of two films of questionable accuracy on global warming, did not refer to Trump by name, the former vice president’s message was clear.

“The system of checks and balances that has protected the integrity of our American system for more than two centuries has already been dangerously eroded,” Gore said.

Gore went on to blame rampant flooding and tornado sightings in the Midwest on man-made global warming, echoing recent attempts by Democratic presidential candidates to do the same in Iowa.

“Speaking of wind, the winds are increasingly destructive in our world,” Gore said. “Yesterday was the 13th day in a row when multiple tornadoes touched down in the United States—500 this month.”

“Hurricanes have become much stronger. Today, the Arkansas River is 4 feet higher than the all-time record flood stage. The Mississippi River is setting records as the longest flood ever. Thirty-nine million Americans today are at risk from flooding,” Gore said.

Gore also implored Harvard to divest its endowment from fossil fuel holdings, comparing it to the 1980s campaigns to pull investments in South Africa during apartheid. Gore has often compared climate activism to the anti-apartheid, civil rights, and abolition movements.

“It was immoral to continue investing in apartheid,” Gore said before going on to accuse fossil fuel companies of using the tobacco industry’s strategy to keep the American public ignorant of climate science—a narrative pushed by some liberal media outlets.

“The American people have been the targets of a massive, well-organized, and lavishly-funded campaign of disinformation, designed to spread doubt and confusion and prevent the formation of a political consensus necessary to adopt new policies to save the future of human civilization,” Gore said.