How This Criminal Justice Reform Bill Could Make Our Neighborhoods Safer 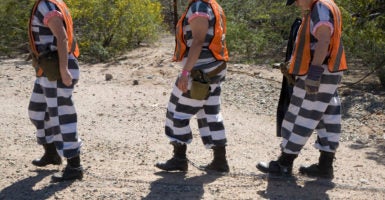 Do you want the federal inmates released in your neighborhood to be better people, or the same, or possibly worse, than when they entered prison?

That’s the key question to ask yourself as you weigh the First Step Act, a bill that would attempt to reduce the currently high rates at which federal inmates reoffend after they are released from prison.

The bill would require the Department of Justice to determine, using a validated risk assessment tool, whether each federal inmate poses a minimal, low, medium, or high risk of recidivating upon release. Each inmate would also undergo a “needs assessment” to determine what, if any, factors—such as a substance abuse or mental health issue, or a lack of education or job skills—contributed to his criminal behavior but might be meaningfully addressed while he is incarcerated.

The First Step Act, which passed the House of Representatives 360-59 earlier this year, may be coming to the Senate floor by the end of the month. The conservative stalwarts on the Senate Judiciary Committe—Chuck Grassley of Iowa, Lindsey Graham of South Carolina, and Mike Lee of Utah—are the lead sponsors, and President Donald Trump has said that he wants to sign the bill this year.

But facing off against the president are Sens. Tom Cotton of Arkansas and John Kennedy of Louisiana. Cotton has gone so far as to suggest the bill is “soft on crime”—although that’s not the case, as former federal prosecutors John Malcolm, who is vice president of The Heritage Foundation’s Institute for Constitutional Government, and Brett Tolman, also former Senate Judiciary Committee legal counsel, wrote in an August Daily Signal op-ed:

At a recent White House roundtable discussion, Mississippi Gov. Phil Bryant, a former deputy sheriff, said he has seen ‘the worst of the worst’ and ‘put a lot of people in jail,’ yet since adopting similar reforms in his state, ‘crime is down 6 percent,’ there are 3,000 fewer inmates, and the state has ‘saved $40 million since 2014.’

Ultimately, opponents of the First Step Act seem to sidestep the fundamental question—given that we will have released inmates, do we want them to be better or worse than when they were convicted?

There are a myriad of questions that the bill’s opponents would rather you consider: Have we had sufficient debate on this legislation? They would say no, but that isn’t the case. In 2015 and in 2018, the Senate Judiciary Committee held hearings on the Sentencing Reform and Corrections Act—a bill that was a more expansive version of the First Step Act.

These are certainly not new issues.

While some changes have been made from earlier debates and discussions, there is certainly enough time to consider all of them. Most, if not all, have been in response to input from law enforcement officials, whom the bill’s authors have been working with closely over the last several years.

The bill’s opponents want to ask if you’re comfortable with the “early release” of prisoners, but, in fact, there is no “early release,” at least not the way the bill’s opponents explain it. There are “earned time” credits, but those simply change where someone serves their time, not the actual amount of time itself. And while there are additional “good time” credits, those are done to restore Congress’ original intention when passing a past law.

The bill would require the Bureau of Prisons to match inmates to programs that are designed and tested to address their specific needs, allowing minimum- and low-risk inmates who successfully participate in and complete those programs to earn time credits that they could cash in toward the end of their sentence to serve some final portion of their sentence under some form of community confinement. But the bill would exclude inmates who are convicted of many serious offenses—mostly violent crimes, terrorism-related offenses, and child exploitation crimes—from taking advantage of these incentives.

Significantly, these incentives would not reduce anyone’s sentence.

And, to be clear, there is a significant difference between “earned time” and “good time” credits, and they shouldn’t be seen as at all the same thing.  As Heritage Foundation senior legal research fellow Paul J. Larkin Jr. has explained, good-time statutes are “a longstanding prison management tool” that  “help a warden and guards maintain discipline by offering an inmate the carrot of a limited amount of credit toward an early release in return for ‘good behavior.’”

In 2015, my colleague John Malcolm wrote in written testimony before the House Committee on Oversight and Government Reform that earned time credit “should be distinguished from good time credit,” because it is awarded for “completing programs or engaging in other productive activities designed to improve the skill sets of inmates, making it less likely that they will recidivate upon release.”

Under the First Step Act, “earned time” credits would be available only to inmates who consistently demonstrate that they pose a minimum or low risk to public safety, not those who pose a high risk of recidivating.  And earned time credits merely allow such individuals to spend part of their sentences in halfway houses, home confinement, or supervised release. Their sentence is not shortened in any way, and inmates who violate any condition of community confinement can be returned to prison.

The bulk of the First Step Act revolves around “earned time” credits, which are earned from prisoners engaging in and completing evidence-based programming that is geared toward addressing whatever underlying issues may have contributed to the offender committing the crime in the first place, be it a lack of job skills or education, mental illness, or a substance abuse issue. No one gets a shorter sentence under those provisions, and no prisoners determined to be high risk will receive the benefits of earned time credit.

Changes to the “good time” credit system are limited and merely meant to reflect what Congress originally intended when it passed the law creating them. The statute states explicitly that good time credit should be 54 days per year, but the Bureau of Prisons, utilizing a bizarre interpretation of that law, provides the possibility of earning only 47 days of good time credit per year.

Finally, while still avoiding the main question, Cotton and others will ask if you would support a bill opposed by law enforcement. While reasonable law enforcement professionals may disagree about the merits of this bill—and all of them deserve our respect and gratitude—there are many among their ranks who support the First Step Act, including the Fraternal Order of Police, International Association of Chiefs of Police, National District Attorneys Association, and National Organization of Black Law Enforcement Executives.

Another supporter is former sheriff Rep. John Rutherford, R- Fla., who has explained that the First Step Act “is not about being soft on crime. This is actually about reducing crime.”  Rutherford said that the end of a prison sentence too often means sending someone “who might be the most incorrigible, disruptive inmate” right back into a crime-ridden community, “and we wonder why these individuals failed and went back to a life of crime.”

“This First Step Act recognizes the importance of following up an arrest with good correctional programming and attempts to change behavior before sending them back to the community,” Rutherford said. “Failing to have a therapeutic model within your correctional facilities” means “setting these individuals up for failure.”

As the Senate debates on how to proceed with the First Step Act, the focus should remain on the key question: Do you want offenders—no matter their crime—to leave prison better or worse than when they entered?