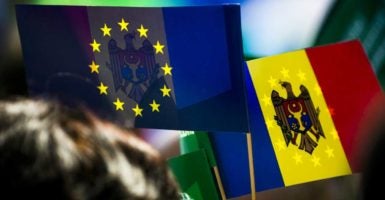 Moldova is wracked by corruption, but Mihail Gofman, a former senior law enforcement official, is trying to reform his country. (Photo: Vadim Denisov/TASS/Newscom)

As the West develops its strategy to deal with a resurgent Russia, more must be done to focus on the so-called gray areas lying between the Euro-Atlantic community and Russia: Georgia, Ukraine, and Moldova.

These countries, while not in NATO or the EU, strive to join these organizations someday. Russia is doing all it can to prevent this from happening. In reality, these countries represent one of the biggest obstacles to a Europe that is whole, free, and at peace.

For the West, Moldova gets the least amount of attention of the three. Russia’s military presence in the Moldovan breakaway region of Transnistria—which is on the border with Ukraine—goes back to 1992. Recently, Russia has focused elsewhere: Georgia in 2008 and Ukraine in 2014. Make no mistake, Moscow’s influence is strong behind the scenes.

But policymakers should be focused on events in Moldova.

Mihail Gofman, a former senior law enforcement official from Moldova’s anti-corruption committee came to The Heritage Foundation to discuss the corruption and increasing Russian influence that plagues his country. He was also in the District of Columbia to discuss these problems with senior U.S. government officials.

Moldova is the poorest country in Europe and, in The Heritage Foundation’s 2016 Index of Economic Freedom, ranked 117th—just after Nigeria—in terms of economic freedom.

Read more about Moldova Economy.
See more from the 2016 Index.

For all intents and purposes, Moldova has been taken over by a clique of oligarchs who control almost every facet of the government and the economy. Since Moldova gained its independence in 1991, scores of senior officials have made hundreds of millions, if not billions of dollars, off dodgy privatizations of state assets.

At the top of this troupe of oligarchs is the vice chairman of Moldova’s Democratic Party, Vladimir Plahotniuc.

Plahotniuc swims confidently in the murkiness of Moldovan business and politics, and is easily the country’s richest man. A recent New York Times article described Plahotniuc as a  “ … tycoon with a reputation so toxic that even his political friends usually try to keep their distance in public.”

When Plahotniuc was welcomed at the State Department in May as part of a Moldovan delegation, commentators back in the country were shocked, confused, and disgusted.

This should come as no surprise.

Allegations of corruption and cronyism against Plahotniuc and his associates are commonplace. It is still not clear what role he had in “the world’s greatest bank robbery” in 2014 when approximately $1 billion went “missing” from three major banks in Moldova, all of which are now insolvent. Now, U.S. officials and even the British Parliament are looking into the matter.

Then-Prime Minister Vladimir Filat and his sidekick, the banker Ilan Shor, are currently in jail for their connection to the affair, and many suspect Plahotniuc was involved too.

In the work he’s conducted over more than eight years, Gofman uncovered the suspected involvement of several top members of the Moldovan political leadership—including former Prime Ministers Filat and Iurie Leanca, and other senior members of the government—in embezzlement, fraud, and money laundering. It is ironic that much of Moldova’s central bank reserves that were plundered came from, in part, a $1 billion tranche given to the country from the International Monetary Fund. In other words, taxpayer’s money from the U.S. and the EU has been used to line the pockets of some of Moldova’s oligarchs, with money allegedly smuggled to the EU, U.K., and the U.S.

Gofman also suggested that some of the alleged theft of $230 million by Russian tax officials and police officers—commonly known as the Magnitsky Affair—was laundered in Moldova with the help of senior Moldovan officials. During his presentation at Heritage he even offered offshore company names and transaction dates and amounts as his proof.

It is a brave thing to come to Washington and expose corruption in your own government at the highest levels. No doubt, Gofman has done so at great personal risk not only to himself but also to his family.

It’s not all doom and gloom in Moldovan politics—there are some bright stars. For example, the U.S.-educated former minister of education, Maia Sandu, is a respected figure Moldovan politics. She might be able to set the country on the right track.

Gofman’s revelations and his tenacious detective work is the first step in bringing transparency and honesty to Moldova’s government. The West should be supportive of his and similar efforts.

This is the best long-term way of bringing Moldova into the Euro-Atlantic community.