The Philippines’ Inhumane Anti-Drug Campaign Is Leading to Mass Murder 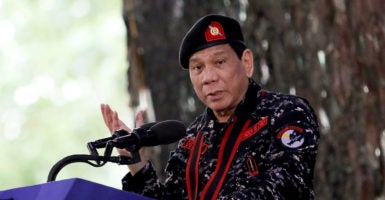 Sang Hyuk Park is a member of the Young Leaders Program at The Heritage Foundation.

Officially, more than 4,200 people have been killed by police in the Philippines during anti-drug operations, which began in July 2016. Human rights groups count as many as 12,000 deaths—many of them at the hands of the Philippine National Police or unknown gunmen, who often have connections with the police.

Authorities say they were acting in self-defense, but there are reasons to doubt this.

First, President Rodrigo Duterte has publicly encouraged on-the-spot killings of drug suspects, warning drug dealers that “my order is shoot to kill you. I don’t care about human rights, you better believe me.”

The government has enabled these brutal operations to be carried out with impunity by “failing” to hold police officers accountable for their role in the killings. It took until this February for the court to hear its first murder case against police in the bloody crackdown that claimed thousands of lives. The case resulted in the arrest of three officers who shot down a barehanded teenager begging for his life.

According to Human Rights Watch, police reports on the eradication of drug suspects uniformly assert suspects resisted arrest and attempted to shoot at police. Witnesses with direct knowledge of what took place portray the scenes as cold-blooded murders of unarmed men in custody. In addition, Human Rights Watch has claimed police routinely plant guns and drug packets to cover up their unlawful killings after the incidents.

Furthermore, in an interview with Amnesty International, a police officer from an anti-drug unit revealed that officers received under-the-table payments for fatally shooting alleged drug offenders. No such reward exists for arrests.

Third, the country’s poorest citizens are disproportionately the victims of the Philippine government’s extra-judicial killings. Many cannot even afford a burial, let alone to file a case.

Out of fear, a lot of the small-time users and pushers of shabu (methamphetamine)—the cheapest, most prevalent in slums—turned themselves in shortly after the campaign commenced. Those drug suspects surrendered in hopes of raising their chance of living, but 62 percent of Filipinos told pollsters they believed these drug suspects would be killed nonetheless.

Duterte and the Philippines government claim the escalating number of deaths demonstrate the “success” of the anti-drug campaign. But clearly, killing minor drug users has little to do with the elimination of overflowing drugs in the country.

Duterte previously said he could take care of his own country and would nurture it to health. But killing is not healing. If Duterte believes he can cover up and justify the government-led unlawful killings, he is wrong.

The U.S. government should continue to hold Duterte accountable for his brutal policies and make it clear there will be additional consequences if he fails to institute a legitimate anti-drug policy.

Note: This article has been updated to correct a poll statistic: 63 percent of Filipinos believe drug suspects who turned themselves in would be killed, not 62 percent.