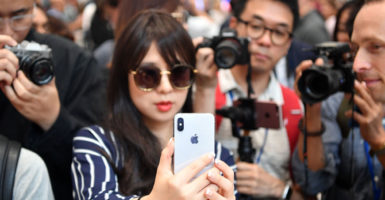 "I have not seen anything on The Daily Signal that was found to be false," reader Wayne Harmon writes. Pictured: Journalists take photos as a woman tests out a new iPhone during a media event in 2017 at Apple headquarters in Cupertino, California. (Photo: Josh Edelson/AFP/Getty Images)

Editor’s note: The Daily Signal’s audience, for the most part, wasn’t too impressed by a journalism group’s briefly labeling us as an “unreliable” news source. Don’t forget to write us at letters@dailysignal.com.—Ken McIntyre

Dear Daily Signal: I read Katrina Trinko’s commentary article on the Poynter Institute for Media Studies and its designation of The Daily Signal as an “unreliable news website” (“Betraying Its Own Bias, Journalism Group Smears Daily Signal as Fake News”). This was a surprise to me. So I did a bit of research, so to speak.

I had become aware of NewsGuard through the Legal Insurrection site. After installing the NewsGuard extension on my system, I used it to check on The Daily Signal.

NewsGuard states: “This website adheres to all nine of NewsGuard’s standards of credibility and transparency.”

This is of little surprise to me.  Keep up the good work.  Your readers know that you’re definitely not fake news.—Victor A. Slayman

This is a lie. I checked myself and saw that DailyKos, the PalmerReport, and at least one pro-Democratic site beginning with “Blue” were all on the list.

Since you are so concerned about the truth, I’m sure you will make an immediate correction.—Kevin Parker

Editor’s note: Katrina Trinko did not say in her commentary that left-leaning media organizations were not on Poynter’s list.

How would Poynter Institute describe MSNBC or CNN or The Washington Post or The New York Times? Those sites are biased with all sorts of false stories.

How many times did Rachel Maddow or Chuck Todd or Chris Cuomo or Wolf Blitzer tell us that indictment was right around the corner?—Timothy Dayton

The Daily Signal is biased. In your defense, all media outlets in the United States are heavily politically biased. With your bias, you are as good and at the same time as bad as everybody else.

This is the real bad news. We need a media outlet searching for the truth, not spreading what officers and donors of The Heritage Foundation wish the true should be.—Henryk  A. Kowalczyk, Chicago

Keep doing your good work. I appreciate your articles at The Daily Signal. Thank you.—Vicky Gibbs

That someone in the Southern Poverty Law Center devised Poynter’s list of unreliable media isn’t a surprise. Good for Poynter for withdrawing it, at least temporarily.

The problem, though, is that once something goes out over the internet, it’s out there forever even if it only appeared for a short period. It’s like one cannot unspeak harsh statements.—Ken Marx

Just another bunch of hypocrites.—Evelyn Overbey

The Poynter Institute for Media Studies can describe itself however it wishes, but that doesn’t make the self-description true.

Media Matters and MoveOn.org also describe themselves in glowing terms.

If Joseph Stalin had a website, he too could have described himself as a progressive “benefactor of the people.” Pol Pot and Caligula could have done the same. So much for self-descriptions.

There are, and will be, sources from which we can determine the accuracy and completeness of what news organizations on the left and the right have been reporting.

I already have seen what the Mueller report came up with. Right now, the score is right news 1, left news 0.—Drew Page

I wouldn’t worry about it too much. Most of us from the beginning understood that the “fact checkers” were generally unburdened with things like facts.—Dave Campbell

It tells me that both the media and the left are feeling the pinch of being outed and they are very uncomfortable with the truth that they are fake news.—David Andrews

I have not seen anything on The Daily Signal that was found to be false. You do present a lot of articles depicting conservatives in a positive light, but you are only telling the truth that certain other news outlets won’t dare tell.—Wayne Harmon

Sounds a whole lot like an IRS operation during the previous administration. Blank resources, no contact verification, don’t bother to check up on actions or ask those who use the “questionable” service.

Truly, The Heritage Foundation is the only resource that I feel comfortable enough with that I can vent and rave about something and not be banished to the tomb, or lambasted for an opinion or thought.

As far as Poynter Institute is concerned, I never even heard of them until this article. So maybe they got a bit miffed about not being recognized and decided to make a mad splash. Not a truly good way to do it.—Karin Callaway, Florida

Poynter did make that horrible mistake, but at least they apologized to every news site that is credible affected by the blacklist.

As far as I am concerned, the Poynter Institute can go … (to keep it civil, you supply the appropriate ending). Perhaps now we can eliminate all of those leftist trolls who routinely fill our websites with garbage, trying to show just how smart they feel they are.

Know-nothings all. Either that or mark them as spam or something equally appropriate.

These leftist trolls are all smarm and no smart. Ignore them. The most powerful insult in existence to someone craving attention is to be ignored.—Randy Leyendecker, Kerrville, Texas

Dear Daily Signal: James Carafano’s “American Taliban” column completely misses the critical point that John Walker Lindh did not serve “his time,” but instead was released early based upon good behavior (“Lindh Shows How West Is Winning War on Terror”).

This “good behavior” release occurred even though Lindh told media outlets as late as 2015 that he thought ISIS was doing a “spectacular job” at a time when their horrific beheadings, mass rapes, and executions were dominating the news.

The same report by the Los Angeles NBC affiliate quotes Lindh as saying, “The Islamic State is clearly very sincere and serious about fulfilling the long-neglected religious obligation of establishing a caliphate through armed struggle, which is the only correct method.”

So, Carafano is fundamentally wrong in that the question is not whether Lindh served his time, because he didn’t. He received early release, cutting his sentence by three years.

Instead, the question policy makers should ask is how the system could have ignored the plain fact that a terrorist who still embraces violent jihad could have received early release simply because he didn’t cause trouble in prison.

The goal of early release is to identify prisoners who can effectively reincorporate into society and get them out as early as legally allowed to live as societal contributors. This case fails miserably.

Releasing a proud terrorist into Northern Virginia before he has served his time in prison is just asking for trouble three years earlier than was necessary.—Rick Manning, President, Americans for Limited Government, Fairfax, Va.