Lindh Shows How West Is Winning War on Terror 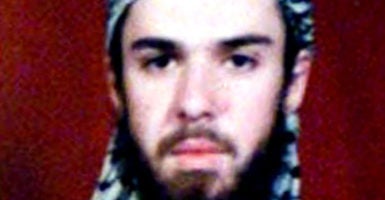 John Walker Lindh, the former “American Taliban,” is almost back on the streets. Captured on the battlefield in Afghanistan in 2002, he was convicted of providing material support to terrorism and has been in prison ever since.

Now he is set to be released on Thursday, even though he has never denounced the Islamist cause. This has led many to ask, “Now what?” I’d respond with another question: So what?

America is a nation of laws and the law must guide our treatment of Lindh. He was lawfully incarcerated. He’s now done his time, so he is due all rights consistent with the terms of his release.

That Lindh might someday decide to go back to the battlefield as an illegal combatant really doesn’t enter the calculus of the law. The U.S. doesn’t pre-detain people because they might be a future national security threat. We leave that to paranoid tyrants.

Should we start losing sleep now, knowing Lindh is out there somewhere? Not really.

For one thing, it’s quite likely that he will move to Ireland, where he claims citizenship. Irish officials have told the media that they’ll let him in if he gets there. All he’ll need is a passport, a ticket, and U.S. permission to hop an international flight.

If that happens, he’ll be walking Irish, not American, streets. And that will be the last we see of him.

Why? It’s a very safe bet that U.S. security officials will assess Lindh as a “continuing risk” and put him on a terrorist watch list. Once that happens, the chances of the U.S. government ever letting him return stateside are infinitesimal.

Can we count on Irish officials to keep close tabs on Lindh? I’d say so. And even if they don’t, we can assume that several non-Irish intelligence and law enforcement agencies around the world will.

U.S. counterterrorism officials doubtless will always consider Lindh a person of interest, keeping tabs from afar. And wherever he may roam, you can bank on the National Security Agency monitoring any and all social media that he uses.

In some ways, Lindh is less of a threat than many other Islamist fighters precisely because he is well-known. There are thousands of foreign fighters from places like Afghanistan, Iraq, and Syria roaming around the world. We know far less about many of them then we know about Lindh. Putting the threat he represents in perspective, Lindh today is small potatoes.

Instead of picking up a gun or a bomb or machete, Lindh might elect to continue his jihad by grabbing a microphone, or a computer keyboard, or a Twitter account. Big deal. Extremist speech is the cost of living in a world with free speech.

Of course, even many of the nations that cherish free speech have laws against extremist speech that directly contributes to violence. Ireland is one of those nations. If Lindh violates those laws he will wind up once more behind bars. And if he chooses to keep his extremist speech within bounds, he will just be another shrill voice that right-thinking people are free to reject.

What if Lindh goes all in and chooses to fight again? Well, then the odds are really stacked against him.

The West has done a decent job crushing the major Islamist terror organizations that have risen up against us. Without question, cells, networks, and individuals still bounce around Europe plotting and undertaking horrendous attacks against innocents.

Lindh might enlist as one more foot soldier in their sorry ranks. But those ranks are being steadily winnowed, and far more plots are thwarted than are ever carried out.

Rather than worry about Lindh, better to think of his experience as a case study of how the West responds to terrorism and terrorists. Remember when Osama bin Laden said the U.S. was a paper tiger that would fold when attacked? How did that work out?

America is still standing. We remain a free, prosperous, and resilient nation. Bin Laden is dead. Lindh spent half his life in prison. Tell me, who is ahead here?