Obstacles to a Trade Deal Come From Both Beijing and Washington 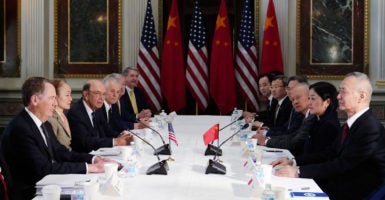 It’s been almost two years since the U.S. and China entered negotiations, and those talks are still dragging on.

No one knows the true progress of these talks except for what’s been reported through anonymous sources, or the occasional update from the White House. But as things stand, the talks have not sufficed to stave off a trade war.

The Office of the U.S. Trade Representative has already begun the process of levying a 25% tax on all things Americans buy from China.

As far as anyone knows, tensions are escalating, and Americans can expect to see the current tariffs stay in place for at least another month, and even up to five more years. This process was always going to be difficult given the Trump administration’s desire to get China to change its ways.

But the obstacles to reaching an agreement and removing the tariffs may not be the agreement itself but may be coming from Washington just as much as from Beijing.

American analysts are all over the map in terms of how the U.S. should handle these negotiations—and their views don’t neatly conform to party alliances.

There is a division among those who are “hawkish,” taking a more confrontational approach that opposes any commercial activity with China, and those who believe that governments (including the U.S. government) should get out of the way of the free flow of goods and services.

Between these groups are those who support the president’s aggressive approach to China, these tend to be experts in their fields, either in political science or security but not economics. The debate between the political scientists and economists over President Donald Trump’s trade tactics tends to boil down to a debate over negotiating tactics versus economic costs.

And then, there are the hard-bargainers, often made up of trade lawyers. This group ranges from protectionists to those seeking genuine change in China’s treatment of trade and investment. They ultimately want a deal, albeit a very tough one. They align with the hawks in their low regard for the World Trade Organization, yet are not naïve enough to expect or desire any kind of “decoupling” of the U.S. and Chinese economies.

Even within these various groups, debates are being had over the time value of negotiations and the degree of economic pain. One popular argument is that short-term pain will lead to long-term gain. Another argument is that in the long term, China’s economy will endure more pain than the U.S.

Yet either way, the U.S. economy still gets hurt.

The experts are also hindered in their advice to the president by his own apparent misunderstandings of the U.S.-China economic relationship.

Whether it’s talking about the trade deficit with China, what sort of impact trade actually has on the U.S. and Chinese economies, or the effects tariffs are having on either of our economies, the president seems misinformed.

This comes at a cost, because despite strong U.S. economic growth—with 3.2% annual growth for the first three months of 2019—tariffs are still imposing a $1.4 billion-per-month loss for the U.S. economy. Meanwhile, China’s growth has been steady at 6.4%.

Where Are Negotiations at Now?

Over the last few months, the media has closely covered the U.S.-China trade negotiations. U.S. and Chinese officials have made several trips to visit one another, yet most of the news covering these negotiations tends to come from anonymous sources.

Even official sources seem an unreliable guide to figuring out where trade relations stand. Just days after Treasury Secretary Steven Mnuchin tweeted about how productive the negotiations were, the president contradicted him, setting up a new wave of trade tensions between the U.S. and China.

In addition, the U.S. has begun the process of imposing a tariff of 25% on an additional $300 billion worth of Chinese imports. Any certainty we thought we had about progress in negotiations has now shut down.

Neither side has plans to hold official visits at this time. The next time Trump and Chinese President Xi Jinping will meet is at the G-20 Summit, in Osaka, Japan, at the end of June.

Though this could be a positive meeting, it’s unlikely to end the ongoing trade tensions.