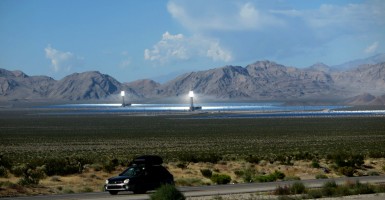 Christmas came early last year for green companies looking for Washington handouts after Congress passed legislation extending massive subsides for wind, solar, and other renewable energy companies. Now the Senate is attempting to ensure that Christmas comes again for these same companies by expanding the qualifying sources for green goodies.

The problem with this is that free enterprise, not the federal government, drives energy innovation.

Proponents of the subsidies are arguing that they were mistakenly left out of the massive omnibus spending bill that included five-year extensions for the wind production tax credit and solar investment tax credit, as well as $1.00-per-gallon tax credits for biodiesel.

Intentional or not, leaving them out of the bill was a small piece of good news for the taxpayer. Importantly, if the government does not provide preferential treatment to these technologies, the market will force companies to rely on the competitiveness of their product rather than on handouts from the taxpayer. Over the long run, companies will be better off if they can stand on their own two feet.

Americans are continuously told that the costs of renewables are coming down and projected to come down further. If that’s the case and any renewable energy technology is cost-competitive with coal, oil, natural gas, or nuclear, it shouldn’t need special treatment from Washington.

The latest battle over the renewable energy tax credit expansion in the Federal Aviation Administration bill exemplifies one of the other problems with the federal government picking winners and losers.

The argument from companies and lobbyists is, they got a subsidy, so what about me? If biofuels receive a subsidy for developing an alternative to the combustion engine as we know it, electric vehicle, natural gas vehicle, propane vehicle companies are all lining up boasting that they’ve got the latest and best technology. And to make life even sweeter for the politician, the company promises to build the plant in his district.

Instead of trying to please everyone with a jumbled mess of handouts, the simple and effective solution is to eliminate preferential treatment for all energy sources and technologies. Politicians should not dictate how private investment is spent by doling out tax credits to the politically connected. The most economical companies will reap the benefits of gaining market access for energy demand.

Not only is this the only way to truly level the playing field, but it also benefits American households, who will not see their taxpayer money wasted and will pay the most competitive prices for the electricity and transportation fuel they use.

For instance, cheap natural gas has gained market share and is benefiting families and businesses alike with lower prices. Lower oil prices, brought to consumers in part because of the shale boom in the U.S., is saving drivers hundreds of dollars per year at the pump. And the benefits of lower prices are rippling through the economy. According to an analysis from Merrill Lynch, consistently low oil prices “will push back $3 trillion a year from oil producers to global consumers, setting the stage for one of the largest transfers of wealth in human history.”

Energy innovation does not come from Washington, D.C.; it comes from the free market. Congress should be taking out the existing special tax breaks for all energy sources and technologies—rather than trying to find pathways for more companies to come to the subsidy trough.