Why Washington’s Spending Addiction Is a Threat to Tax Reform 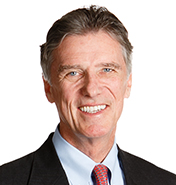 I’m not sure what left the bigger impression on me after my visit with The Heritage Foundation’s Romina Boccia and Adam Michel—the awesome bigness of the federal government’s fiscal challenges or the mindsets of those we elected to deal with them.

The problem is enormous. The federal government spends $4 trillion per year. It takes in $3.3 trillion in taxes and fees and thus runs a deficit of about $650 billion. The national debt is $20 trillion—$15 trillion in publicly held debt and $5 trillion the government owes itself for its various trust funds, such as Social Security.

Worse, two-thirds of the budget—mostly Medicare, Medicaid, and Social Security—grows on autopilot, and increases in these three programs will account for 85 percent of the increase in federal spending over the next 10 years.

But what is truly frightening is that Congress assumes in all its tax and budget projections that government will continue to grow at a fairly sustained rate and that any projected cuts in spending won’t ever actually happen.

When Congress considers tax reform or other budget issues, it can use one of two formulas to determine the impact of the proposals on taxpayers, governments, etc. They are known as the current law baseline and the current policy baseline.

The current policy baseline acknowledges current policy results in the tax cuts being extended and evaluates tax and budget proposals using these real-world assumptions. The advantage to Congress of using the current law baseline is it means more money to spend from the supposedly expiring tax breaks. And if Social Security and Medicare exceed their theoretical trust fund allotments, Congress can increase spending on these programs and offset it with revenue anticipated from the expiring tax cuts that won’t ever be allowed to expire.

What’s worse is the easiest thing for Congress to do is nothing. Failure to pass even one year’s worth of tax extenders—the package of legislation that keeps the tax breaks in place—means Congress must come up with $500 billion to cover the increased tax revenues from the tax cuts that were supposed to be eliminated but were not.

This may get Congress past the next budget crisis, but it prevents progress that truly could transform the economy.

For instance, it is hard to get the country to support a giant cut in corporate taxes when it is $20 trillion in debt and the prime targets for cuts are health care programs for the poor and old and pensions.

But cutting the corporate from 35 percent—the highest rate in the industrialized world—to 15 percent or 18 percent would spur enormous gains, particularly for those at the bottom of the economy. Cuts in corporate tax rates lead to significantly higher wages for workers and allow small businesses—which can’t afford teams of lawyers to help them deduct their way out of these taxes—to compete on a more even plane with larger competitors.

Same goes for depreciation. A company buys an asset. An IRS bureaucrat determines that asset will last five years. So, the company can deduct a fifth of the cost of the asset for five years, even though it already has paid the entire cost. If companies could deduct all the cost up front, then the $23 billion American businesses spend complying with this part of the tax code could be redirected to investments that produce jobs and higher salaries.

Watching Congress dole out money is worse than watching sausage being made.

We’re footing the bill in taxes, lost growth, and lower salaries. Entitlement programs are two-thirds of the budget now and growing. We spend $650 billion per year as a country that we do not have, and the worst is yet to come.

It is not sustainable. It is not responsible. But it is not inevitable. And a good first step might be to remove the biases that favor more taxes and spending.