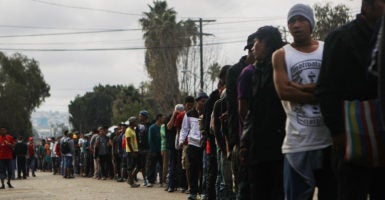 Members of the migrant caravan wait in line to receive breakfast outside a temporary shelter set up for members of the caravan, Nov. 24, 2018, in Tijuana, Mexico. (Photo: Mario Tama/Getty Images)

A U.S. judge on Monday temporarily barred the Trump administration from enforcing its “Remain in Mexico” policy, which returns asylum-seekers back to Mexico while they await a hearing.

San Francisco Judge Richard Seeborg ordered the administration on Monday to halt the deportation of asylum-seekers and gave federal officials until Friday to contest the decision, according to The Associated Press. The ruling comes after two civil liberties groups sued the administration over its December 2018 policy sending foreign nationals seeking asylum in the U.S. back to Mexico while they await immigration hearings.

The suit was filed by the American Civili Liberties Union and Center for Gender and Refugee Studies on behalf of 11 asylum-seekers. It alleges that the administration is violating immigrants’ rights to apply for asylum by making it very difficult to do so. The suit also claims that the administration is failing to recognize and address the violent conditions that are forcing migrants to seek asylum in the U.S., according to the groups.

“This is a naked attempt by the Trump administration to eviscerate our country’s asylum protections,” ACLU attorney Jennifer Chang said in a statement following the lawsuit’s filing.

The Trump administration says it is within the bounds of immigration law—under the 1996 Illegal Immigration Reform and Immigrant Responsibility Act—to send migrants back to the country in which they last set foot while they await their case hearings, according to NBC. Prior to the policy, which took effect in San Diego in January, asylum-seekers were released into the U.S. while awaiting their immigration hearings instead of being sent back to Mexico.

“This law has been on the books for a very long time and has not been utilized. That’s the example of the kind of legal authority that already exists that is the kind of thing we can deploy to restore integrity to the immigration system,” Stephen Miller, senior adviser to the president, told The Daily Caller News Foundation.

Civil rights groups argue that the administration is misapplying a provision in immigration law that is not meant to apply to asylum-seekers who travel to border checkpoints, according to The AP. The new policy means that migrants won’t necessarily have lawyers or interpreters at their hearings, according to ACLU attorney Judy Rabinovitz, The AP reported.

The policy has likely contributed to growing numbers of immigrants trying to cross the border illegally rather than through ports of entry, according to data from U.S. Customs and Border Protection.

Federal courts face an immigration case backlog of over 800,000 cases.