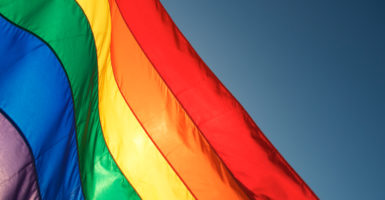 State laws similar to the "Equality Act" have been used to punish those who hold to traditional views of sexuality and gender. (Photo: PeskyMonkey/Getty Images)

Sexual orientation and gender identity policies have been used at the state and local level to attack businesses and charities, allow males into women’s sports and spaces, and politicize medicine.

Even though the overwhelming majority of Americans oppose the effects of these policies, politicians are blindly pushing further forward to expand their reach.

Yet House Speaker Nancy Pelosi, D-Calif., recently delivered on her promise to introduce the so-called “Equality Act,” which would elevate sexual orientation and gender identity to protected classes in federal anti-discrimination law.

The Equality Act would definitely have a negative impact nationwide. Yet many Americans are already subject to sexual orientation and gender identity policies at the state and local level.

Twenty-four states have passed sexual orientation and gender identity laws and the consequences for residents of those states have been disastrous.

That includes laws that ban discrimination on the basis of sexual orientation and gender identity in employment, public accommodations, housing, and education, as well as bans on counseling for individuals with unwanted same-sex attraction.

Moreover, an estimated 400-plus cities and localities across all 50 states have adopted sexual orientation and gender identity policies by local ordinance.

Colorado billionaire Tim Gill, the man dubbed “the megadonor behind the LGBTQ rights movement” by Rolling Stone, disclosed that his strategy is to implement sexual orientation and gender identity laws as quickly and widely as possible at the state level.

He also disclosed his attitude towards supporters of traditional marriage.

“We’re going into the hardest states in the country,” he said. “We’re going to punish the wicked.”

That’s exactly how these laws have been used—not to protect people from unfair treatment, but to punish people for their beliefs.

That’s true when it comes to debates over the meaning of marriage and the reality of biological sex.

Americans from all walks of life who hold that marriage is a union between one man and one woman have been punished for their convictions.

The most high-profile example is from Gill’s Colorado. Jack Phillips, owner of Masterpiece Cakeshop, won at the Supreme Court after the Colorado Civil Rights Commission accused him of discriminating on the basis of sexual orientation under state law for refusing to bake a custom cake for a same-sex wedding ceremony.

But Phillips is not the only one who has lost business and faced lawsuits for acting according to his beliefs about marriage. Other cases have arisen in Washington, New Mexico, Michigan, Minnesota, Colorado, Arizona, and Georgia, involving florists, photographers, wedding venue owners, videographers, web designers, calligraphers, and public servants.

Meanwhile, faith-based foster care and adoption agencies in Pennsylvania, New York, Illinois, California, Massachusetts, and the District of Columbia have been forced to shut down for operating according to their religious beliefs about marriage—further exacerbating our current foster care crisis.

Now, cases are emerging involving Americans who have suffered consequences for holding that sex is a biological reality.

Although the Supreme Court ruled in Phillips’ favor, the Colorado commission also investigated him for declining to create a “gender transition cake.” He sued and the commission settled.

Catholic hospitals in New Jersey and California were sued for refusing to perform hysterectomies on otherwise healthy females who wanted to pursue gender transition. A third Catholic hospital in Washington settled after the ACLU sued it for declining to perform a double mastectomy and chest-reconstruction surgery on a 16-year-old girl.

A teacher in Virginia was fired for failing to use a female student’s preferred masculine pronouns and a professor in Ohio was disciplined for doing the same.

A homeless shelter for abused women in Alaska has been sued for refusing to admit a biological male. In Michigan and Florida, women lost their memberships at Planet Fitness when they questioned sharing locker rooms with biological males under the gym’s transgender bathroom policy.

Meanwhile, in Illinois, California, and Vermont, foster parents are expected to provide children suffering from gender dysphoria with transition-affirming therapies over parents’ medical or moral objections. That suggests that adherence to radical gender ideology could become a new litmus test for parental fitness.

In fact, in Ohio, a judge removed a 17-year-old girl from her parents’ custody after they refused to sign their daughter up for testosterone treatments. The judge did so even without a state sexual orientation and gender identity policy.

It’s worth noting that all of this has happened without a federal sexual orientation and gender identity policy.

The federal Equality Act would only make this bad situation worse.

The bill would pose an existential threat not only to religious organizations from churches to schools to charities, but also to secular institutions as well—not to mention the livelihoods of individuals who do not agree with new sexual norms or gender ideology.

That’s why a federal sexual orientation and gender identity law with religious exemptions is still bad policy. That strategy only protects the interests of a few and imposes a bad law on everyone else.

The weaponization of sexual orientation and gender identity laws at the state and local level have made it eminently clear that a federal law would have devastating effects on the American people.

Lawmakers ought to oppose any kind of federal sexual orientation and gender identity anti-discrimination law.