Voters in Anchorage Can Protect Women’s Privacy in Ballot Initiative 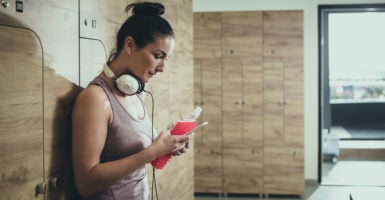 Proposition 1 gives Anchorage residents the opportunity to protect sex-specific facilities from intrusion by members of the opposite bodily sex. (Photo: skynesher/Getty Images)

Voters in Anchorage, Alaska, will soon have the opportunity to protect the safety of women and girls in private facilities when they consider the Proposition 1 ballot initiative.

The proposition—due by mail on April 3—asks whether residents wish to roll back the city’s “equal access to bathrooms and locker rooms” policy, which allows biological males to access women’s personal facilities.

Although 58 percent of Anchorage residents rejected this policy by public vote in 2012, the mayor and city assembly imposed the policy in 2015 by ordinance, adding sexual orientation and gender identity as protected classes under the city’s anti-discrimination policy.

Now, supporters of the ordinance are characterizing it as an “equal access” policy—even though it really means allowing members of the opposite biological sex to enter sex-specific spaces.

Finding accommodations for transgender individuals need not come at the cost of bodily privacy and safety for people across the board, especially that of women. Broad “equal access” policies such as this one put the most vulnerable citizens at risk.

Consider what happened earlier this year in Anchorage at the Downtown Hope Center, an overnight shelter for abused homeless women.

A biological male who was born Timothy Paul Coyle, but who goes by the name Samantha Amanda Coyle, twice tried to enter the Hope Center. This is a shelter where women sleep on the floor, practically elbow to elbow.

The first time, Coyle was inebriated and had just gotten into a fight with a staffer at another shelter. After denying Coyle entry to Hope Center, the staff paid Coyle’s fare to the emergency room to receive medical attention.

The second time, Coyle tried to gain entry during the afternoon soup kitchen.

Coyle filed a complaint with the Anchorage Equal Rights Commission claiming discrimination on the basis of gender identity under city statute AMC 5.20.050.

The Hope Center responded in a letter to the commission, citing the needs of the women who shelter there:

Many of the women who the Hope Center shelters have escaped the horrendous conditions of sexual exploitation and human trafficking. It would be wholly irresponsible and potentially dangerous for Hope Center to house biological males in its shelter overnight with the population of abused and battered women who stay at the shelter.

This episode in Alaska exposes the dangers of blanket sexual orientation and gender identity policies. Policies that allow biological males to share the same intimate spaces as biological females, and vice versa, raise serious privacy and safety concerns—particularly in cases dealing with the victims of domestic or sexual abuse.

The most worrisome possibility is that sexual predators will feign being transgender in order to engage in inappropriate acts, such as indecent exposure, voyeurism, and sexual assault. This has already occurred multiple times—see the nine-page list of individuals charged with sex crimes in intimate facilities, compiled by The Heritage Foundation.

The Anchorage policy poses an ongoing risk to all women, but particularly to those who have been victims of past sexual assault. These women are best protected by sex-specific facilities that ensure bodily privacy. They can easily be triggered by having to share intimate spaces with men, or being exposed to the male body—regardless of whether the bodily male identifies as a woman or has undergone sex reassignment surgery.

So-called “equal access” policies, like AMC 5.20.050, fail to take into account the concerns of these victims. They also fail to provide sufficient safeguards against those who would abuse the law to gain access to opposite-sex facilities for nefarious purposes.

This can be seen in the Anchorage public accommodations law. In the definitions portion (AMC 5.20.010), the city says that one’s gender identity can be established by medical history, consistent assertion of that identity, “or other evidence that the gender identity is sincerely held … and not being asserted for an improper purpose.”

But how can one determine whether someone has an “improper purpose” in mind before an incident occurs?

Since gender identity policies do not provide a clear and objective standard for who belongs where, protecting potential victims from sexual predators depends on being able to prove that the predator had improper motives.

Intent is already difficult to prove, and the supposed fluidity of gender identity makes it all the more difficult to establish whether someone claimed a certain gender identity for an improper purpose. This type of law places more burden on the victims and law enforcement community to prove the predator’s intent.

Such a burden would likely discourage victims from reporting incidents of voyeurism or indecent exposure. Moreover, law enforcement officials could become more wary of investigating or enforcing sex crime statutes for fear of being accused of discrimination themselves.

Finding accommodations for transgender individuals should not place such a heavy burden on the rest of society. Above all, the safety of women in sex-specific facilities must not be compromised. Local institutions and authorities should work together to craft reasonable policies that keep everyone safe.

Anchorage residents now have the opportunity to set things right by taking action on Proposition 1, protecting the safety and privacy of everyone in the city.