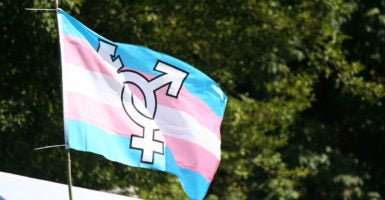 Studies show that 80 to 95 percent of children with gender dysphoria come to identify with their bodily sex after puberty. (Photo: Tracey Quirk/ EyeEm/Getty Images)

Should government force people to do things they think are wrong? The so-called Equality Act would do just that.

The bill now before Congress would elevate nonbiologically-based “gender identity” as a protected class in federal anti-discrimination law, while expanding the “public accommodations” definition to include any establishment that provides health care.

In practice, it would politicize medicine and silence any medical professional or health care organization that considers sex to be a biological reality.

The bill would require doctors to prescribe cross-sex hormones and perform so-called transition-affirming surgeries—removing healthy reproductive organs and/or creating facsimiles of genitalia—against their best medical judgment. It would also force hospitals to offer these procedures, despite their religious, moral, or medical objections.

Physicians, nurses, and other medical professionals must be free to exercise their best medical judgment when treating their patients. The Equality Act would impose one view on the entire profession, not as the result of new scientific discoveries or professional consensus, but by ideological fiat.

This health care mandate would implicate insurers, too. Workers could sue their employers if their insurance does not cover “sex-reassignment.” This could translate to years of costly litigation for companies and charities that object to these procedures. Recall how many years it took the courts to grant relief from the Obamacare contraceptive mandate to companies like Hobby Lobby and groups like the Little Sisters of the Poor.

Not only does the bill lack any conscience protections for anyone with objections to transition-affirming therapies, it also eliminates protections provided by the Religious Freedom Restoration Act. This federal law reiterates that the government cannot burden religious exercise without a compelling reason, and if it must do so, it must use the least restrictive means. Without recourse to this law, it will be even harder for affected individuals to gain relief from the proposed mandate.

Litigation has already begun at the state level. Catholic hospitals in New Jersey and California have been sued for declining to perform hysterectomies on otherwise healthy females who wished to pursue gender transition.

A third Catholic hospital in Washington settled out of court after the ACLU sued them for declining to perform a double mastectomy on a 16-year old girl with gender dysphoria.

Yes, the attempt to politicize medical treatment extends to children. Since the Equality Act lacks any age restrictions, it has the power to compel pediatricians to implement the radical transition-affirming protocol proposed by transgender activists: puberty-blocking drugs to children as young as 9, cross sex-hormones for those as young as 14, and surgery by 18.

Studies show that 80 to 95 percent of children with gender dysphoria come to identify with their bodily sex after puberty. Yet activists insist that these children ought to be prescribed off-label puberty-blocking drugs—even though they can cause dangerous side effects ranging from acne and weight gain to breast cancer, cardiovascular disease, liver disease, and, of course, sterility.

And the mother of a gender dysphoric daughter asked at a Heritage Foundation panel discussion earlier this month: If it’s not OK for doctors to remove healthy limbs from children, why would it be OK to remove their healthy reproductive organs?

Transgender activists tell parents that these measures are the only way to prevent their child from attempting suicide. Yet those who have had transition surgery are 19 times more likely to die by suicide.

These numbers show that the debate over these procedures is far from over. Leveraging the government to forcibly override the conversation within the medical community and the broader public would be a huge mistake.

Medical professionals would not be the only ones affected by an authoritarian gender-identity health care mandate. The Equality Act could have implications for parents’ decisions about their children’s health care. In Ohio, a couple lost custody of their teenage daughter when they declined to put her on testosterone supplements. We can expect to see more cases like this one if the Equality Act becomes law.

The drastic government overreach of the Equality Act would compromise the independence and integrity of the medical profession with serious consequences for children and their families. This is not a win for equality. It is an attack on our freedoms and common sense.