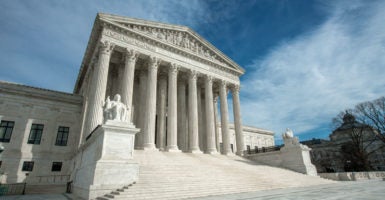 The Supreme Court ruled 7-2 in favor of Jack Phillips, a Christian baker who declined to bake a custom cake for a same-sex wedding. (Photo: dkfielding/Getty Images)

It’s always tempting to minimize the hurt of a loss by trying to downplay its scope.

That’s what the left has been doing since last week’s Supreme Court decision in the Masterpiece Cakeshop case, which was decided 7-2 in favor of Jack Phillips, the Christian owner of Masterpiece Cakeshop. Mainstream media outlets like The New York Times, NBC News, and CNN called the lopsided decision “narrow.” That’s another way of saying “we lost small.”

But the decision, written by Justice Anthony Kennedy, took the bite out of this narrative by exposing a huge fallacy in the ACLU’s main argument in the case.

The ACLU argued at both the Supreme Court and in the court of public opinion that believing marriage is between a man and a woman, and acting accordingly, can only be discrimination on the basis of identity, not a mere disagreement about the meaning of marriage.

In Phillips’ case, the ACLU tried to dismiss the fact that he served all customers, but only declined to create custom cakes that expressed messages for certain occasions that violated his conscience. Those occasions include Halloween celebrations, divorce parties, and same-sex weddings.

The court’s clear rejection of the discrimination argument has implications for many of the other conflicts currently brewing between religious freedom and sexual orientation.

The claim that one is being discriminated against because of who they are resonates strongly with our sense of injustice, and it should. But that’s not what this case was about. Fortunately, Kennedy had already seen through the ACLU’s argument last December when he dismissed it as “too facile,” stating flatly, “It’s not their identity” that Phillips objected to, “it’s what they are doing.”

On the very first page of the Masterpiece decision, Kennedy restated what he had said in Obergefell v. Hodges, the 2015 decision that redefined marriage. “Religious and philosophical objections to gay marriage are protected views and in some instances protected forms of expression.”

In essence, he rejected the ACLU’s argument that if you hold the view that marriage is between a man and a woman and live according to it, you must be a bigot. And that is no small thing, because the left’s most lethal ammunition is to shame people who believe in traditional marriage into silence and to intimidate others into complicity in imposing LGBT ideology on others.

Justice Neil Gorsuch went a step further in his concurring opinion to point out how the real identity-based discrimination in the case was actually directed by the state of Colorado toward Phillips. He examined how the state applied one standard toward Masterpiece Cakeshop and an entirely different standard toward three other bakeries that declined to create custom cakes for a religious customer, William Jack, containing a message that opposed same-sex marriage.

… when the same level of generality is applied to both cases, it is no surprise that the bakers have to be treated the same. Only by adjusting the dials just right—fine-tuning the level of generality up or down for each case based solely on the identity of the parties and the substance of their views—can you engineer the commission’s outcome, handing a win to Mr. Jack’s bakers but delivering a loss to Mr. Phillips.

The court’s decision in Masterpiece was a big win, not only for religious freedom, but also for the proper enforcement of nondiscrimination laws.

The Supreme Court has a long track record of correctly resolving identity-based discrimination claims under the 1964 Civil Rights Act.

In Heart of Atlanta Motel, Inc. v.United States, the court declared that African-Americans couldn’t be denied accommodations in interstate motels because of the color of their skin. In Hishon v. King & Spalding, the court held that female lawyers could not be kept off the partnership track in law firms because of their XX chromosomes. And in Equal Employment Opportunity Commission v. Abercrombie & Fitch Stores, Inc., the court decided that Muslims couldn’t be barred from selling fashion because they dress according to their religious beliefs, including by wearing a headscarf.

In each of these cases, the Supreme Court prevented discrimination against someone simply because of who they are. No one should be denied a job, a promotion, or a place to sleep because of their religion, their gender, their race, or because they are gay.

But none of the legal conflicts between religious liberty and LGBT people are about identity-based discrimination. They are simply about disagreement on marriage.

The ACLU advanced arguments that threatened not only religious freedom, but also the credibility of nondiscrimination laws. If everything is labeled discrimination—even things that are not—then people will grow cynical about discrimination claims in general, and as a consequence may fail to support truly legitimate claims. When the ACLU cries wolf, it hurts the real victims of discrimination.

By recognizing the critical difference between disagreements over marriage, and discrimination based on identity, the Supreme Court has upheld both the freedom of Americans to hold different opinions on controversial issues like marriage and the right to be free from discrimination on the basis of identity.