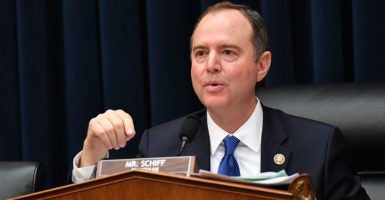 Rep. Adam Schiff , chairman of the House Permanent Select Committee on Intelligence, holds a hearing on "Putin's Playbook: The Kremlin's Use of Oligarchs, Money and Intelligence in 2016 and Beyond" on March 28. (Photo: Mandel Ngan/AFP/Getty Images)

“I think the one that has been the most discredited through this entire process is Adam Schiff,” Chaffetz said Thursday on “Varney & Co.”

He then pushed for congressional Republicans to unite and bring their demands directly to Speaker of the House Nancy Pelosi.

I wish the Republicans would gather in force and demand that change. Nancy Pelosi knows better. It is a privilege to sit on this committee but he’s used the guise of ‘Hey, I see classified information and nobody else does and I’m telling you I’ve seen it firsthand.’ He’s the only person on the planet because he’s making it up and he shouldn’t have a security clearance if you’re going to act like that.

He also claimed President Donald Trump fully cooperated with the Russia probe and cleared himself, but insisted on a new investigation to find out how the allegations began.

Donald Trump Jr. was in there for hours and hours testifying. I don’t know that the president could have done anymore for openness and transparency through this investigation. And it turned out exactly the way he said. He’s in the clear. But now there has to be a review of how this whole fiasco started.