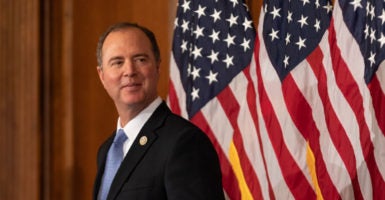 House Intelligence Committee Chairman Adam Schiff on Wednesday revealed a sweeping plan to investigate President Donald Trump, including whether foreign actors have leverage over the Republican, his family, or associates.

Schiff laid out five areas the Democrat-controlled committee plans to investigate. The California Democrat made the announcement after the committee voted to provide the Special Counsel’s Office with transcripts of interviews conducted as part of an investigation into Russian interference in the 2016 election.

“The President’s actions and posture towards Russia during the campaign, transition, and administration have only heightened fears of foreign financial or other leverage over President Trump and underscore the need to determine whether he or those in his Administration have acted in service of foreign interests since taking office,” Schiff said in a statement announcing the expanded investigation.

Schiff has long pledged under his control, the House Intelligence Committee would aggressively investigate Trump’s campaign activities, as well as his finances. Schiff has said repeatedly he wants to subpoena Deutsche Bank, which did business with the Trump Organization.

The five areas of focus, according to a statement released by Schiff, will be:

Republicans ended the committee’s investigation in April 2018, announcing there was no evidence that members of the Trump campaign colluded with Russian government operatives to influence the election.

But Schiff’s statement suggests not only that the committee will resume a collusion investigation, but that the probe will focus on whether Russians sought to influence any Trump associates.

“The Committee must fulfill its responsibility to provide the American people with a comprehensive accounting of what happened, and what the United States must do to protect itself from future interference and malign influence operations,” Schiff said.

Schiff has been one of the most outspoken Democrats on the issue of Trump campaign collusion. He gained notoriety for saying in a March 22, 2017, interview he had seen “more than circumstantial evidence of collusion.”

When pressed to describe that evidence, Schiff has failed to show Trump associates conspired with Kremlin agents to release emails stolen from Democrats, which were released by WikiLeaks. He has instead cited the infamous June 9, 2016, Trump Tower meeting that Trump campaign officials had with a group of Russians that offered dirt on Hillary Clinton.

There is no evidence that anything of substance was shared in that meeting, which was hosted by Donald Trump Jr.

Special counsel Robert Mueller indicted several Trump associates, but none so far have been charged with conspiring with Russians.

Schiff also said the committee plans to release all transcripts of testimony given to the committee. He did not set a timeline for the release of transcripts, saying that the committee will release them “in a manner and according to a timetable that allows continued pursuit of important leads and testimony.”

Schiff also said Wednesday that the committee is postponing testimony from former Trump lawyer Michael Cohen. Cohen was scheduled to testify behind closed doors on Friday, but will now appear Feb. 28.