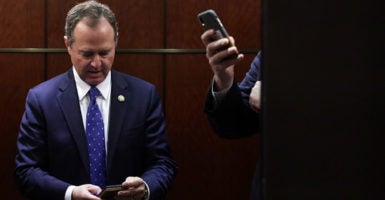 House Intelligence Chairman Adam Schiff, D-Calif., checks his phone Tuesday as he takes an elevator after a closed-door markup meeting on his committee's report on the impeachment inquiry into President Donald Trump. (Photo: Alex Wong/Getty Images)

Schiff may have violated the same rule he used to threaten House Republicans, said Tom Anderson, director of the Government Integrity Project at the National Legal and Policy Center, a watchdog group.

Schiff warned Republicans on the House Permanent Select Committee on Intelligence not to reveal the name of the whistleblower who first filed a complaint about President Donald Trump’s now-famous July 25 phone conversation with Ukrainian President Volodymyr Zelenskyy.

“Schiff warned Republicans members if they did anything to publicize the whistleblower, it would be a violation of House ethics rules,” Anderson told The Daily Signal.

“He didn’t want other members to expose private information of the whistleblower,” Anderson said of Schiff, “but he is doing the same thing to people who don’t have anything to do with the impeachment process.”

The House Intelligence Committee, chaired by Schiff, has been the main player in Democrats’ impeachment inquiry targeting Trump.

Phone records included in the committee’s report show that Trump’s personal lawyer, Rudy Giuliani, was in contact with associate Lev Parnas, who was recently indicted for a campaign finance violation.

The records also show that Giuliani was in contact with Nunes and Washington journalist John Solomon, formerly of The Hill, and that Nunes also talked to Parnas.

According to the Schiff report, Giuliani also contacted the White House Situation Room and the Office of Management and Budget.

While obtaining information about a journalist likely would not be subject to an ethics complaint, significant concerns have been raised about Schiff’s releasing the information on Solomon, who long has covered Democrats’ efforts to cripple or remove Trump.

The House rule applies only to attacks on fellow House members.

However, release of records regarding figures not targeted in the investigation does demonstrate Schiff’s antipathy toward political rivals and sets an alarming precedent, Anderson said.

“I hope his colleagues will pause and consider the ramifications of releasing private phone records, including records of calls made to journalists,” Anderson said. “In their zeal to pursue Donald Trump, the Democrats are setting terrible precedents. Do they really want to have these tactics used against them by Republicans in the future?”

House Democrats seek to impeach Trump based on the hold he temporarily placed on nearly $400 million in congressionally approved military aid to Ukraine, which is resisting Russian advances.

During the July call, according to a White House transcript released by Trump, the two leaders talked briefly about Trump’s interest in investigating Ukraine’s alleged meddling in the 2016 presidential election. They also referred to the Ukraine-related actions of former Vice President Joe Biden and his son, Hunter Biden, who had a lucrative position on the board of the Ukrainian energy company Burisma.

Anderson said House rules need to be updated to specifically prohibit what has occurred under Schiff.

“The House ethics rules on the books are outdated,” he said. “Technology is moving faster than legislation and in a wild, Wild West world of impeachment, the current rules are antiquated.”

Patrick Boland, spokesman for Democrats on the House Intelligence Committee, did not immediately respond to The Daily Signal’s inquiry for this report.

But Boland told The Daily Beast that the committee did not subpoena the records of either Solomon or Nunes.

“Any questions about the fact that members, congressional staff, or journalists appear in call records released by the committee should be directed at those individuals, who were in contact with individuals of investigative interest to the impeachment inquiry,” Boland told the liberal website.

The Office of Management and Budget challenged the Schiff report’s claim that Giuliani called the budget office, asserting that the phone number cited in the report was incorrect.

The USA Patriot Act allows limited instances in which a phone company may hand over someone’s records to federal law enforcement authorities without notifying the person. Generally, federal law requires notification of the individual if their phone records are accessed, and the Patriot Act isn’t applicable to congressional probes.

“There does not appear to be any basis to believe that a congressional committee is authorized to subpoena telephone records directly from a provider—as opposed to an individual,” former Attorney General Michael Mukasey told The Wall Street Journal.

In September, the House Intelligence Committee subpoenaed the phone records of five individuals from both AT&T and Verizon, according to the Journal.

AT&T this week released a statement saying it is “required by law to provide information to government and law enforcement agencies.”

An AT&T spokesperson did not respond to an inquiry from The Daily Signal. A Verizon spokesperson responded, but said the company does not wish to comment.

“This is an outrageous and shocking abuse of power by a member of Congress, misusing his authority to spy on his political opponents, reporters, and lawyers engaging in legal activity representing a client,” Hans von Spakovsky, a senior legal fellow at The Heritage Foundation, told The Daily Signal, referring to Schiff.

“AT&T should be embarrassed that it participated in this spying operation rather than going to court to give the targets the opportunity to stop this underhanded domestic political espionage,” said von Spakovsky, a former Justice Department lawyer.