7 Consequences of the Equality Act 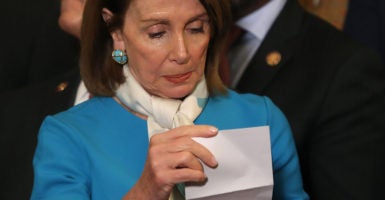 House Speaker Nancy Pelosi reads a note handed to her during a news conference Wednesday where House and Senate Democrats introduced the Equality Act of 2019, which they say would ban discrimination based on sexual orientation and gender identity. (Photo: Mark Wilson/Getty Images)

Editor’s note: This article was published in 2019. Since then, the House passed the Equality Act, but the Senate did not take action on the legislation. The House is expected to vote again on the Equality Act this week.

In fact, the current issue of the American Journal of Bioethics includes an article arguing that the state should overrule the parents of transgender children who do not consent to give them puberty-blocking drugs.