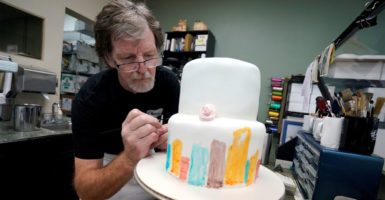 Over the past few years, Colorado has been on a crusade to destroy Jack Phillips’ business over a thought crime. The state’s Civil Rights Commission had bored into Phillips’ soul and established that his refusal to create a specialty cake for a same-sex couple was driven by his personal animosity toward gay customers rather than by his Christian faith.

Unelected officials began fining Phillips in an effort to put him out of business for being a Christian. I wrote about the case numerous times, and every time, I was assured that his actions had nothing to do with “religious liberty”—a term almost always placed within quotation marks to intimate that it’s a bogus concern.

I was assured that it’s constitutionally acceptable for a gay couple to force a man to create art that undermines his faith. I was assured the case against him would be a slam-dunk for Colorado.

Perhaps it’s unsurprising that so many assumed Phillips’ cause was a lost one. After all, legacy media had fostered a number of misconceptions about the case.

Most noteworthy, news reports (and, more importantly, headlines) created the impression that Phillips had refused not only to design an artistic cake with a personalized message that would have undermined his long-standing beliefs—the same beliefs Barack Obama and many other Democrats (but not all conservatives) were still pretending to hold when David Mullins and Charlie Craig walked into Masterpiece Cakeshop—but also to sell gay customers anything in his shop. It was untrue.

In the end, the 7-2 Supreme Court decision earlier this year protecting Phillips from this attack was both heartening and welcome. But despite all the celebration by First Amendment advocates, it was also a narrow victory. The only real mistake the commissioners had made, according to the court, was openly demeaning their target.

It was then-Commissioner Diann Rice, for example, who had compared religious liberty to Nazism and slavery. The fact that Colorado would not take similar cases against bakers who refused to make specialty cakes for Christian customers (also a protected class) was another obvious example of its social activism.

The Supreme Court found that Colorado didn’t display religious neutrality when punishing Phillips for his beliefs, showing “a clear and impermissible hostility toward the sincere religious beliefs.”

The commission would not make the same mistake next time.

On June 26, 2017, the day the Supreme Court agreed to hear Phillips’ case, Autumn Scardina, a transgender attorney and activist, called Masterpiece Cakeshop and asked Phillips to design a custom cake with a blue exterior and a pink interior to symbolize a transition from male to female. Phillips politely turned Scardina down. “I was stunned,” the lawyer risibly claimed in her complaint to the Colorado Civil Rights Commission.

Scardina, of course, didn’t accidentally ask the most famous Christian baker in the nation to make a “transition” cake. Scardina is leading a crusade against Phillips. In one call, Scardina allegedly asked for “an image of Satan smoking marijuana.”

In any event, the state of Colorado has allied itself with activists, formally determining that there was probable cause that Phillips had indeed discriminated against Scardina based on “gender identity.”

It’s those values that upset Scardina and members of the Colorado Civil Rights Commission. Though they can’t say it explicitly, most progressives are fine with discrimination against religious groups. In their hierarchy of moral concerns, free expression isn’t nearly so concerning as the hurt feelings of aggrieved gay couples. And Colorado is again complicit in another attack on the Constitution. Until the Supreme Court comes down with a ruling that explicitly protects religious liberty from state-sponsored attacks on faith, they’ll keep trying.

But it goes well beyond those legal concerns. Activists—including the commission—are trying to destroy a man for thought crimes. This state-sponsored harassment isn’t only about Phillips’ modest business in Lakewood, Colorado, though that’s surely part of it. It’s a warning to all those with unpopular opinions to stay in line.

Trust me, no businessperson wants to deal with the Kafkaesque nightmare of having to account for the moral veracity of every transaction. So in many ways, no matter what happens in court, these inquisitors have already won.