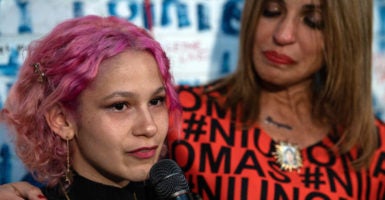 Victoria Gonzalez, girlfriend of Joaquin Oliver, one of four seniors among the 17 persons who died a year ago at Florida's Stoneman Douglas High School, speaks Tuesday at the opening of the "Walls of Demand"exhibit at the Center for Contemporary Political Art in Washington. At right is Joaquin's mother, Patricia Oliver. (Photo: Nicholas Kamm/AFP/Getty Images)

Any credible doctor will say that having the right diagnosis is important. If a patient receives the wrong diagnosis, he is almost certain to begin the wrong treatment.

That can mean not just that the patient doesn’t get any better, but that the “treatment” actively harms him. Imagine, for example, starting chemotherapy for a broken leg.

Unfortunately, one year after the tragic loss of 17 lives at Marjory Stoneman Douglas High School in Parkland, Florida, many lawmakers and advocacy groups still insist on offering ineffective measures to prevent school shootings based on a misguided diagnosis of the problem.

They continue to declare that the U.S. is suffering from an epidemic of school shootings and other types of gun-related violence directed at the nation’s students, despite clear evidence to the contrary.

Worse, they claim that the real problem is the prevalence of firearms and demand that law-abiding Americans be subjected to increasingly drastic measures to combat this alleged epidemic.

The U.S. isn’t suffering from a school shooting epidemic.

Parkland-style shootings, while devastating, remain extraordinarily rare events. Since 2010, there have been eight school shootings with two or more fatalities other than the shooter, for an average of one multiple-fatality shooting a year at the nation’s 100,000 public and private K-12 schools.

Many of these events were not “Parkland-style” attempted mass shootings, either. Every single one of these instances is certainly a tragedy, but that still amounts to far less than an “epidemic.”

The 2017-2018 school year saw an unusually high number of school shootings and firearm-related deaths on campus, but the current 2018-2019 school year has seen a return to the baseline.

In fact, so far, there has been exactly one firearm-related student homicide on a K-12 campus during school hours. It was the result of an interpersonal dispute between two students, and no one else was injured.

Further, the nation’s schools are trending toward becoming safer from violent deaths, not less safe. Four times as many students suffered violent deaths at school in the early 1990s than do students today.

Unsurprisingly, politicians and advocacy groups who wrongly claim that we are in the midst of an “epidemic” tend to support dramatic plans to stop it.

When we take a closer look at these commonly proposed “treatments,” however, it becomes clear that they will not effectively prevent future school shootings.

Semi-automatic rifles, such as the AR-15, are owned by tens of thousands of law-abiding Americans, who use them every day for a variety of lawful activities, including self-defense.

Statistically, these firearms are the least likely to be used in violent crimes and account for only a very small percentage of firearm-related homicides every year.

In fact, twice as many people are beaten to death with hands and feet every year than are fatally shot with a rifle of any kind.

Despite oft-repeated rhetoric that semi-automatic rifles are the “go-to” weapon for school shooters and mass public shooters, 60 percent of those shootings are carried out with handguns alone.

Only 10 percent involve the use of a rifle alone. Moreover, some of the deadliest school shootings in U.S. history—including those at Virginia Tech, Red Lake High School in Minnesota, and Umpqua Community College in Oregon—involved low-caliber handguns.

Raising the minimum age for someone to legally purchase a gun to 21 would severely restrict the fundamental rights of law-abiding young adults without meaningfully reducing the ability of would-be school shooters to access firearms.

The reason for this is simple: Most school shooters don’t buy their own firearms. Instead, they use firearms that were legally purchased by older friends or family members, to which they had ready access at home.

Ironically, handguns remain the most commonly used firearm by school shooters despite the fact that individuals under the age of 21 are prohibited from purchasing them.

Most school shooters are not old enough to legally buy these guns already, and yet they still manage to access them. Raising the minimum age of purchase for long guns—which they are far less likely to use in the first place—will do nothing to address how these shooters actually obtain their guns.

Universal background checks would be similarly ineffective at preventing school shootings, for many of the same reasons.

Many commonly owned firearms use factory-standard magazines with a capacity of more than 10 rounds. Those are not “high-capacity” magazines, but normal magazines, millions of which are owned by law-abiding citizens.

Studies have shown that mass shooters do not fire at fast-enough rates for magazine capacity to meaningfully affect the deadliness of the shootings. In fact, the Parkland shooter used 10-round magazines because they enabled the gun to fit into his bag.

Limiting magazine capacity harms the ability of law-abiding citizens to defend themselves or others, especially when outnumbered.

At the same time, it would not stop would-be school shooters from simply reloading or bringing multiple firearms. That’s precisely what the Virginia Tech shooter did in order to kill 33 individuals with handguns.

Targeted Treatments for a Controlled Injury

If we want to honor the memories of those who did not come home last year from Marjory Stoneman Douglas High School, we must address the actual factors that lead to school shootings.

No, most commonly proposed gun control measures won’t save lives. But that doesn’t mean there are no available options with which to effectively prevent future tragedies.

The majority of the gunmen in mass public shootings exhibit clear signs of mental illness prior to their attacks, and school shooters are rarely any different.

Regrettably, almost none of these individuals were receiving mental health treatment when they committed their violent acts.

One of the most tragic aspects of Parkland was that, as with many other school shootings, it could have and should have been easily prevented if the relevant officials had taken seriously the many warning signs that these disturbed students exhibited.

Several different agencies and school officials received numerous tips that the Parkland shooter posed a heightened risk of violence, but they did nothing to meaningfully intervene.

Early intervention can save lives.

Each of these thwarted school shootings had two things in common. First, someone—usually the would-be shooter’s peers or family members—recognized serious red flags and reported them to law enforcement or school officials. Second, the officials who received that information took prompt and appropriate action to intervene.

Schools and law enforcement agencies must learn from Parkland and ensure that threats to student safety are fully investigated and that intervention occurs when appropriate.

Most active-shooter incidents occur in a relatively short period of time, and most casualties occur in just a matter of minutes.

Further, when law enforcement or other armed civilians confront the active shooter, the shooter’s knowledge of imminent armed confrontation usually prompts his surrender or suicide.

Unfortunately, the average response time for law enforcement is far too long, even for calls regarding active shooters.

Even then, the armed response is only as effective as the willingness of those armed responders to actually confront the shooter.

Lives were lost at Parkland because first responders initially failed to enter the building and engage the gunman, while lives were saved by the heroic actions of armed school resources officers just months later in Santa Fe, Texas.

Every second cut from the time it takes to engage in armed confrontation with a school shooter is vital to saving lives.

Individual schools and school districts must be free to make independent decisions regarding how best to accomplish this quick armed response, according to their risk assessments and available resources.

It’s time to learn from Parkland and admit that gun control is the wrong solution to the wrong problem.

The sooner we get the correct diagnosis, the sooner we can start using effective policies to prevent very real tragedies.