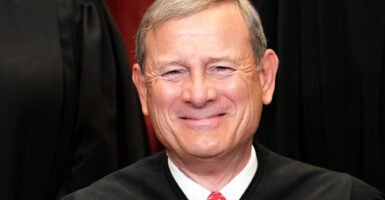 The Supreme Court heard oral arguments Wednesday in the first significant Second Amendment case the court has taken up in over a decade.

Although the high court is unlikely to render a decision in the case until next spring, the arguments in New York State Rifle & Pistol Association v. Bruen highlighted the many ways in which New York faces an uphill battle in defending its concealed carry permitting scheme.

First, some background. The Second Amendment protects the “right of the people to keep and bear arms” and is premised on the underlying natural right of self-defense.

New York law nevertheless prohibits all but a select few from carrying firearms in public for self-defense. And even then, these gun owners may do so only after they’ve proved to the government’s satisfaction that they have a “good cause” for “needing” to exercise the right.

In essence, New York and the seven other states with similarly restrictive public carry laws have turned an enumerated right of the people into a special privilege for a special subset of people.

The petitioners in this case are two New York residents with extensive experience and training with firearms. Both were denied concealed carry permits because licensing officials determined they did not “face any special or unique danger to [their] life.”

The two gun owners argue that New York’s restrictive and discretionary system for public carry permits is unconstitutional because it effectively stripped them of their right to bear arms in public for self-defense.

New York, for its part, argues that its laws constitute perfectly reasonable regulations that are fully consistent with the text, history, and tradition of the Second Amendment.

Why It’s an Uphill Battle for New York

The oral arguments before the Supreme Court highlighted serious problems with New York’s interpretation of the Second Amendment and the history of gun control, and underscored the uphill battle the state faces in defending the constitutionality of its public carry laws.

For example, Underwood argued at several points that New York does, in fact, grant concealed carry permits to ordinary citizens on a regular basis. But when pressed by Justice Samuel Alito, she conceded that ordinary, law-abiding New Yorkers who work late at night and wait for public transportation in high-crime areas would not, as a rule, be granted carry permits.

New York also struggled at times to defend foundational aspects of its legal argument. The state, for example, insists that the incredibly low rate of carry permits granted in New York City reflects a perfectly reasonable exercise of discretion.

Chief Justice John Roberts highlighted the paradox of this approach, in which residents in high-crime urban areas are less justified in invoking their right to public carry for purposes of self-defense than residents in rural low-crime areas, simply because “there are a lot of police around” in the high-crime areas.

Underwood responded that “rapes and robberies happen on the deserted bike paths,” but then appeared to largely concede the point and switch to an argument about the public safety implications of public carry in urban areas.

If Underwood’s answer seemed halfhearted and evasive, it’s because Roberts’ question drew attention to a gaping hole in the state’s argument.

The data are very clear that a person is far, far more likely to be victimized—and therefore more likely to want (and need) to rely on his or her Second Amendment rights—in any given neighborhood in the five boroughs than in any particular square mile of rural upstate New York. This is true despite the fact that New York City has one of the highest law enforcement-to-resident ratios in the nation.

Playing Fast and Loose With History

New York similarly struggled to provide support for its premise that a less restrictive carry framework would result in far more accidents and criminal activity, referencing a single brief filed with the court.

The most comprehensive and best-conducted studies fail to support this conclusion. The premise is also inconsistent with the experience of 43 other states, the majority of which loosened their carry laws over the past several decades, and none of which reverted back to a more restrictive carry regime due to concerns over public safety.

And given all of the empirical evidence on the extremely law-abiding nature of concealed carry permit holders, it makes little sense that any incidental rises in gun crime could be meaningfully tied back to a population that is overwhelmingly not responsible for those crimes.

Perhaps the most glaring example of this was caught by Alito, who chided New York for, quite literally, rewriting history in its brief. Alito noted while New York framed an early 19th-century North Carolina legal manual as authorizing the arrest of “all such persons as in your sight shall ride or go armed,” the state omitted a key qualification from the quote.

The text actually reads that such arrests should be carried out on those who “shall ride or go armed offensively.” The word “offensively” clearly affects the meaning of the text, changing it from an apparently unqualified prohibition on carrying arms in public to a rather mundane statute akin to modern statutes against brandishing guns at others or threatening deadly force without justification.

It’s always risky to predict the outcome of any particular Supreme Court case. However, based on the justices’ jurisprudential histories and the questions they asked at oral argument, it seems likely that a majority will find in favor of the petitioners, affirm that there is, indeed, an individual right for ordinary citizens to carry firearms in public for self-defense, and conclude that states must permit residents to exercise this right subject only to reasonable regulations on time, place, and manner.

Such an opinion from the high court likely would act as a death knell not just to New York’s public carry framework, but to similarly restrictive frameworks in states such as California, Hawaii, and New Jersey.

Contrary to the fantastical predictions of some gun control advocates and some Second Amendment advocates, it is highly unlikely that the court will spell out a right to permitless carry or question the constitutional validity of less restrictive “shall issue” permit laws.

The practical implication likely will be that states such as New York pivot to fairly onerous “shall issue” frameworks along the lines of the one implemented in the District of Columbia, where applicants “shall” be issued permits, but only if they jump through myriad expensive and time-consuming bureaucratic hoops.

Such a result may not provide a perfect resolution—the more burdensome “shall issue” frameworks certainly raise constitutional concerns of their own.

But as Paul Clement, the petitioners’ attorney, told the court, many of the 80 million Americans currently unable to exercise their Second Amendment rights in public eagerly look at D.C.’s public carry laws and say, “We’d like what they’re having.”