Debunking the Myth of ‘Concealed-Carry Killers’ 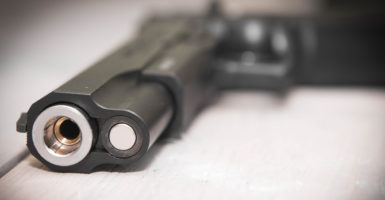 The Violence Policy Center—a gun control advocacy group—released a study last month it wrongly claims shows that “too many concealed-carry permit holders are a direct threat to public safety.”

That claim rests on an analysis of a database documenting “non-self-defense incidents,” which the organization says proves that “allowing random people to carry guns endangers public safety.”

On its face, that claim is contrary to the wealth of data indicating that concealed-carry permit holders are one of the most law-abiding populations in the nation.

Moreover, concealed-carry permit holders are not “random people,” but individuals with the government’s affirmative approval to carry a concealed firearm in public places after having completed a series of steps required by the government.

It’s hardly surprising, then, that the Violence Policy Center claim falls apart when even the slightest bit of scrutiny is applied to it.

Not only is the claim based on a grossly misleading characterization of what the database actually captures, but the numbers from the database flatly contradict the Violence Policy Center’s claim that America’s 18 million concealed-carry permit holders represent a serious risk to public safety.

That’s particularly true in light of the role permit holders play in actively protecting themselves and the public from violent crime.

The Study Grossly Mischaracterizes the Data

Beyond the immediately suspect nature of the Violence Policy Center’s claims, the database erroneously includes many deaths that are not attributable to the misuse of a concealed-carry permit.

The anti-gun group defines “non-self-defense incident” to include virtually any fatality involving a concealed-carry permit holder, including ones that do not remotely resemble the type of intentional homicide evoked by the Violence Policy Center’s strong claims about public safety.

For example, roughly 40% of the deaths (534 of 1,335) are suicides. While tragic, firearm suicides are not what a term like “concealed-carry killer” brings to mind.

Moreover, analysis of the remaining “non-self-defense” deaths also belies the group’s use of the term.

The Violence Policy Center includes many fatalities where the shooter’s concealed-carry permit was irrelevant because he or she did not carry a concealed weapon in public while perpetrating the crime.

Had their respective states never issued a concealed-carry permit to a single person, these shooters still would have been in lawful possession of these firearms inside their own homes.

Also of dubious inclusion are at least 10 cases that involve someone other than the permit holder using the permit holder’s firearm, and a number of cases where the individual’s permit either should have been suspended or was actually suspended under state law at the time of the death.

Finally, despite the Violence Policy Center’s claim that it only analyzed non-self-defense shootings, in 72 of the 801 homicide deaths included in the database, the shooter’s claim of self-defense is still pending in court.

In other words, the anti-gun group has preemptively convicted those parties before a jury has had the opportunity to determine whether they acted in lawful self-defense.

The Data Paints a Different Picture

As a result of the report, the Violence Policy Center’s legislative director stated that “concealed-carry killers continue to claim innocent lives at a shocking pace.”

The only shocking thing about the pace of crimes committed by concealed-carry permit holders is just how slow it is compared with the statistical expectation.

That percentage drops even lower if any of the defendants in the 72 cases still pending in court are determined to have acted in lawful self-defense.

At the same time, the national violent crime and homicide rates in 2018 were actually lower than they were in 2007, and substantially lower than their historical highs in the early 1990s, when far fewer Americans had concealed-carry permits.

Similarly, despite the anti-gun group’s claim that concealed-carry permit holders represent a severe danger to law enforcement officers, the data indicates that they are accountable for a disproportionately small number of law enforcement deaths.

That accounts for roughly 3.7% of law enforcement officer felonious deaths, even though concealed-carry permit holders account for 5.5% of the population.

Just as with non-law enforcement deaths, many of the cases the Violence Policy Center includes as law enforcement officer deaths involve scenarios where the killer’s status as a permit holder played no role in the crime.

In fact, by our count, only 10 of the 24 law enforcement officer deaths between 2007 and the time of publication involved permit holders actually carrying concealable firearms in public places.

For example, the database includes the case of Ryan Schlesinger, who in November 2018 used a rifle from inside his own home to kill an officer in Tucson, Arizona, serving him with an arrest warrant.

Even if his permit was, through some technicality, still “valid” under state law, the permit would have been automatically suspended upon his arrest for a felony.

As we have often noted, Americans defend themselves with their firearms between 500,000 and 3 million times every year.

Moreover, concealed-carry permit holders have intervened to stop many scenarios that likely would have turned into mass killings but for their actions.

For example, on Feb. 13, a permit holder in Colonial Heights, Tennessee, was deemed a “hero” by local police after he prevented a deadly encounter at a dentist’s office from turning much worse.

In the end, the Violence Policy Center’s database does nothing more than confirm that concealed-carry permit holders are, on the whole, incredibly law-abiding, and that allowing more Americans to exercise their constitutional right in more places does not result in a serious threat to public safety.