Dispelling False Narratives in the Wake of the Santa Fe Tragedy 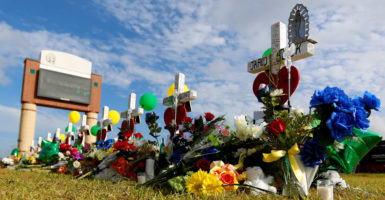 Last week, a teenager stole his father’s shotgun and .38-caliber revolver, smuggled them into his Santa Fe, Texas, high school under a trench coat, and proceeded to murder 10 innocent people before surrendering to police.

It’s another devastating reminder that human beings are capable of inflicting horrific pain on each other, and that while the nation’s schools have become progressively safer over the last 30 years, there is still much more that can be done to prevent future tragedies.

This shooting has also helped perpetuate gun control and school safety narratives that are sliding further from the truth than ever before. It is important that these false narratives be corrected—we do not honor those who lost their lives by calling for policies that won’t prevent future tragedies because they aren’t based on facts.

Here are three of those narratives.

Some gun control advocates have repeated this argument after learning that Santa Fe High School had two armed school resource officers on duty during the shooting. But this argument fails to account for the fact the officers’ timely response almost certainly prevented further loss of life in this particular incident.

Although 30 minutes elapsed between the moment the shooter opened fire and the moment he laid down his firearms and surrendered to police, it’s unclear how long he was actively shooting and how long he was holed up in a classroom contemplating suicide.

What is clear, though, is that, in the words of Galveston County Judge Mark Henry, the response of the school police officers was “very critical” to ensuring the carnage was not even worse. One of the officers, John Barnes, was shot in the arm during the confrontation, and at the very least served to distract the shooter from his rampage.

Further, even if we considered armed guards to have been a complete failure at Santa Fe High School—a highly dubious proposition given the information detailed above—there are numerous other instances of armed guards indisputably saving many lives in similar scenarios.

Take, for instance, the events at an Illinois high school just days before the Santa Fe shooting, where an armed school resource officer shot and subdued a former student who opened fire at a graduation practice. Because of the officer’s quick response, not a single innocent person was injured.

In the weeks after the tragic murder of 17 individuals at Marjory Stoneman Douglas High School in Florida, where an armed school resource officer failed to respond to the sounds of gunfire, an officer was credited with saving lives at a Maryland high school when he immediately confronted an attacker after he killed one student and wounded another.

Finally, no one suggests that armed guards can prevent all school deaths any more than having a large police force can prevent all criminal activity. Protecting the nation’s students in the same way we protect concertgoers, celebrities, and politicians means we must utilize a variety of safety measures—only one of which is more armed security at schools.

In this case, there are serious questions about how a student was able to reach a classroom with two firearms—including a less-than-concealable shotgun—under a trench coat without raising suspicion or being otherwise noticed.

This could likely be addressed by limiting the number of school entry points and using magnetometers, which a number of schools already use in tandem with armed security.

2. This is why we need commonsense gun control.

Not a single commonly proposed gun control law would have been more effective than existing laws at preventing a teenager—already too young to buy or own firearms—from stealing his father’s legally owned “non-assault weapons,” taking them into a gun-free zone, and murdering 10 innocent people.

School shooters in particular don’t typically use firearms they purchased themselves, but rather they use firearms that they had ready access to from older friends or family members. Raising the minimum age of firearm purchase to 21 not only fails to address the prominent factors in firearm access for school shooters, but also deprives law-abiding young adults of the capacity to adequately exercise their own right to self-defense.

Similarly, school shootings (and mass public shootings generally) are rarely carried out with “assault weapons.” Nor does the use of an “assault weapon” indicate that the incident will have a high casualty count, because semi-automatic rifles are no more or less deadly at close range than other commonly owned firearms. In fact, shotguns cause almost unrivaled devastation to the human body in close-quarter situations. (See here also.)

Moreover, the data doesn’t support an assertion that the use of 30-round (“high capacity”) magazines result in higher numbers of casualties than 10-round magazines. The Virginia Tech killer used only two handguns to take twice as many lives as the Parkland killer. He simply brought extra magazines.

The Washington Post helped propagate this narrative with its decision to run the headline: “2018 has been deadlier for schoolchildren than service members.” This story was then retweeted by thousands, and the alleged fact repeated countless more times.

The problem is that it isn’t true.

While more students have been killed in school shootings so far this year than military members who died while on duty, the reality is that the rate of death—which more accurately reflects “deadliness”—if far higher for service members.

Why? Because military members constitute a much smaller segment of the population than do students. There are over 50 million students in the nation’s K-12 schools, but only 1.3 million military servicemen and women (many of whom are not actively deployed in war zones).

As Robby Soave from Reason points out, this means that servicemen and women are 17 times more likely to be killed than students. This is true even though 2018 has been a year of extraordinarily high numbers of school shooting victims and a comparatively low number of combat deaths.

Despite the horrific nature of school shootings and their ability to shock the nation’s conscience, they remain incredibly uncommon occurrences.

Their rarity does not make them any easier to comprehend, nor should anyone expect it to bring comfort to grieving friends and relatives. But it does put into perspective the conversations we should be having about how to protect students from in-school violence of all kinds.

These events are tragic. But they are rare. And there are ways to prevent them from happening in the future. It just happens that the most effective preventions are those based in reality, not in misinformation.

Editor’s note: The name of the Oregon high school where a shooting occurred in 2014 has been corrected.